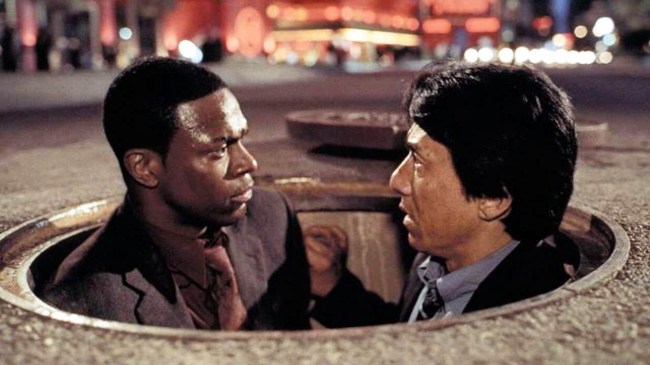 The original “Rush Hour” debuted way back in September of 1998 and we haven’t had a sequel to the classic buddy cop movie since August of 2007 when “Rush Hour 3” was released. However, it sounds like we are getting a “Rush Hour 4,” but there’s a catch because there’s always a catch. Jackie Chan revealed that the movie is definitely happening, but as long as Chris Tucker signs on to do the sequel. During a recent interview on Power 106’s The Cruz Show, Jackie Chan said the next chapter of “Rush Hour” is happening. Maybe.

“For the last seven years, we’ve been turning down the script, turning down the script. Yesterday, we just agreed. The script probably at the end of this month will have a second draft and next year, [we’ll] probably start. If… Chris Tucker agrees. It’s not about money! It’s about [having the] time to make. Otherwise, ‘Rush Hour 4’ we’re all old men. I tell Chris Tucker, ‘Before we get old, please do ‘Rush Hour 4.'”

Tucker has yet to comment publicly if he is down for “Rush Hour 4.” Not sure why Tucker wouldn’t be available to star in “Rush Hour 4,” especially since his slate seems pretty clear. Since 2008, Tucker has only appeared in two movies: “Billy Lynn’s Long Halftime Walk” and “Silver Linings Playbook.” IMDB says he has not definitely signed on for any future projects and is only rumored to be in the new “Rush Hour” and the new “Friday” movie titled “Last Friday.”

The director Chan is probably referencing is Brett Ratner, who directed all three movies in the franchise. There are many reasons that New Line Cinema and all parties involved would want to make another “Rush Hour” film, actually, there are 849 million reasons to make a new “Rush Hour” movie. The original “Rush Hour” grossed over $244 million worldwide, “Rush Hour 2” made over $347 million, and “Rush Hour 3” banked an astounding $258 million.