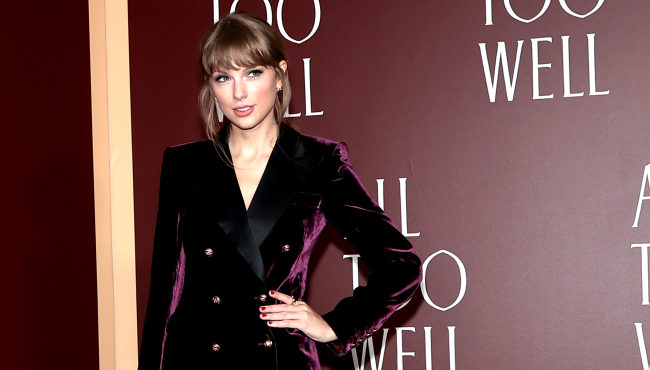 Taylor Swift is notorious for writing several of her songs about her ex-boyfriends. One of those failed relationships took place from October 2010 to March 2011 and involved actor Jake Gyllenhaal.

Many fans, who are also notorious in their own right, have speculated that Taylor Swift’s 10 minute long song All Too Well, and its accompanying short film, is about Gyllenhaal supposedly dumping her over their nine year age difference.

“You said if we had been closer in age maybe it would have been fine. And that made me want to die,” she sings in one part of the song.

“And I was never good at telling jokes, but the punch line goes. I’ll get older, but your lovers stay my age,” Swift sings in another.

Related: Scooter Braun Makes Public Plea To Taylor Swift, Who Unleashed Her Fans On Him, After His Family Receives Death Threats

Another line in the song goes, “And I, left my scarf there at your sister’s house. And you’ve still got it in your drawer even now.”

The significance of those lyrics is that, according to RadarOnline.com, “In November of 2010, the then-couple was photographed in Brooklyn, New York, near the home of his sister, Maggie Gyllenhaal. Taylor was sporting the accessory in question.”

For what it’s worth, Jake Gyllenhaal, 41, is currently dating a 26-year-old model named Jeanne Cadieu.

He also doesn’t think the song All Too Well is about him.

Jake Gyllenhaal has no time for cyberbullying by the Swifties

In a new interview with Esquire, Gyllenhaal talked about about the song and the accompanying harassment he, his sister and others close to him received when it was released.

“It has nothing to do with me. It’s about her relationship with her fans,” he claims. “It is her expression. Artists tap into personal experiences for inspiration, and I don’t begrudge anyone that.”

When pressed about it, Gyllenhaal responds, “At some point, I think it’s important when supporters get unruly that we feel a responsibility to have them be civil and not allow for cyberbullying in one’s name.”

Gyllenhaal was forced to turn off his Instagram comments due to the overwhelming amount of negativity he received after the song’s recent re-release.

Related: Taylor Swift Fans Are Mad At Burger King And Are ‘Canceling’ The Fast Food Restaurant After BK Delivered A Sick Burn On Twitter

“That begs for a deeper philosophical question,” he adds. “Not about any individual, per se, but a conversation that allows us to examine how we can — or should, even — take responsibility for what we put into the world, our contributions into the world. How do we provoke a conversation? We see that in politics. There’s anger and divisiveness, and it’s literally life-threatening in the extreme.”

He continued, “My question is: Is this our future? Is anger and divisiveness our future? Or can we be empowered and empower others while simultaneously putting empathy and civility into the dominant conversation? That’s the discussion we should be having.”

As for whether he has actually listened to Swift’s album, Gyllenhaal replies with a quick “No.”

Good luck with the Swifties, Jake. You’re going to need it.

i hope "jake gyllenhaal" is jealous of my queen taylor swift bc she living her best life rn, jake gyllenhaal she remembers it all too well

jake gyllenhaal is a pretentious twat

Jake Gyllenhaal is full of shit.