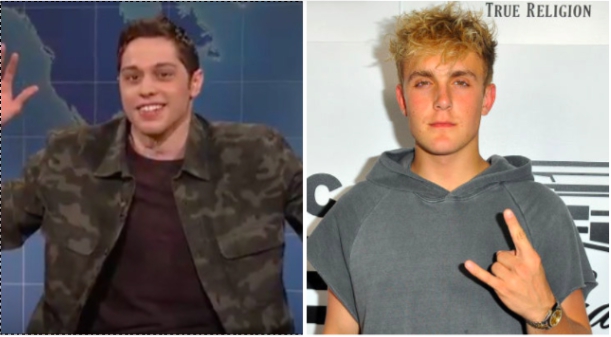 In this installment of Tattoo Wars–a series that didn’t live before this and won’t live after it–we analyze the ink of two celebrities, Jake Paul and Pete Davidson.

For those who are unfamiliar with Jake Paul, he’s pretty much that guy in your high school who pumps his chest out in the hallways and gives nerds swirleys even though his mom wouldn’t let him play tackle football. Davidson is SNL‘s resident young person who seems like the type of dude who asks you for your homework every day in homeroom but you let it slide because he plays the role of entertaining wiseass to the teacher and he sells you really good pot.

Both Paul and Davidson recently got new tattoos, so lets analyze which is more regrettable.

Davidson got brand new girlfriend Ariana Grande’s initials on his thumb and her signature bunny ear logo behind his ear. Davidson just broke up with Larry David’s daughter, Cazzie,  in the middle of May and reports emerged that the he began “casually dating” Grande just days later.

Things look to have taken a turn for the serious.

Here is Jake Paul’s new ink, which appears to be a snake wrapped around a few leaves and a bunch of other shit that likely means nothing to him…

New tat who dis? Sorry mom🙈… If you got a tattoo what would it be?! Comment below👇🏼

Final piece of @jakepaul tattoo
What do you think
🔥🔥 or 💩💩 pic.twitter.com/obvqcOvxN1

Verdict: Even though Jake Paul’s tattoo looks he opened up to a random page of pre-inked tattoos at the parlor, I got to give him the edge over the dude who got inked with his girlfriend of 20 minutes initials.