Once Again, Boxing Fans Are Claiming That A Paul Fight Was Rigged 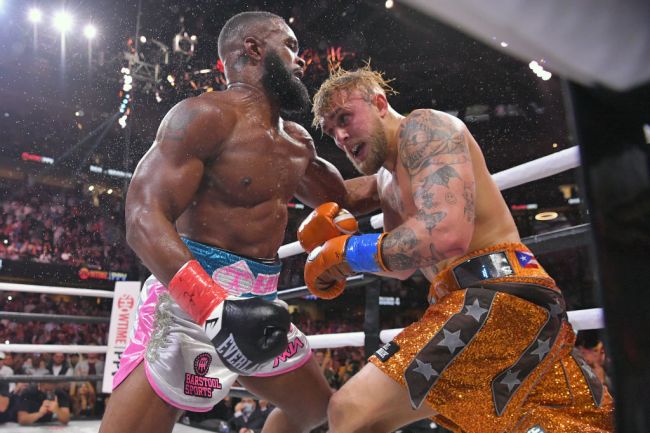 Hmmm… one of the Paul brothers being called out for potentially fixing a fight? Why does this all seem so familiar? Time is a flat circle, after all, especially these days.

The reason, though, that is all feels so familiar is that it happened earlier this Summer, as fans called out the Logan Paul vs. Floyd Mayweather fight for being fixed. Perhaps unsurprisingly, accusations of match-fixing popped up once again on Sunday night following the Jake Paul vs. Tyron Woodley bout in Cleveland, which saw Paul take home the victory by way of split decision.

RELATED: Fans Accuse Floyd Mayweather Of Holding Up Logan Paul After Knocking Him Out In Viral Conspiracy Theory Video

Specifically, calls of match-fixing came after Woodley landed a devastating right hook that sent Paul into the ropes, only to seemingly let him off the hook thereafter:

Twitter was unsurprisingly quick to jump on the moment, wondering if it was evidence of match-fixing:

Was woodly ever like this rigged fight #tryronwoodly #JakePaul #boxing pic.twitter.com/e2jHZ5zx8R

And you straight bsing me and telling me Jake Paul won, Tyron Woolley looked into Jake’s soul at that exact moment #rigged pic.twitter.com/5pYfIB9MLJ

I understand why ppl saying rigged.. hella times Tyron Woodley would hit Jake Paul wit a shot and had no follow up it’s almost like he’ll hit him and wait for him to recover like “aye u good??”

This man jake paul won even tho he got rocked…that’s how you know it’s rigged af😂 #jakepaulvstyronwoodley #boxing #JakePaul #tyronwoodley pic.twitter.com/2D76VaFnzW

The judge when Jake Paul was on the ropes gasping for air #PaulWoodley #Rigged pic.twitter.com/cAr3rmWmk0

Despite the accusations of fixing, a rematch is largely already in the works, as Woodley challenged Paul in the ring to another fight:

“Of course, he wants the payday,” Paul responded. “You had your opportunity. You had your chance. If you get the tattoo of ‘I love Jake Paul,’ let’s run it back.”

As for who Paul will be fighting next, the 24-year-old said he’s going to take some time off first.

“I’ve been boxing for 18 months now. I haven’t been to the dentist and I have barely gotten my haircut for like two years. My teeth are crooked and my nose is crooked. I may need to take some time off and figure out who I am. I’m only 24 years old. We will see.”