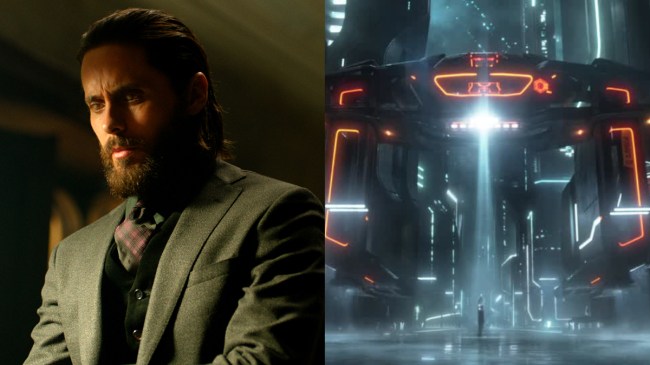 As the Mad Titan Thanos once opined: “Fun isn’t something one considers when balancing the universe, but this does put a smile on my face.” And that eloquently diabolical quote perhaps best describes how I’m feeling right now.

After spending the last six-plus years (basically since the release of Suicide Squad) telling anyone who would listen that Jared Leto is a fraud, the general pop cultural consciousness has finally seemed to come to that realization, too.

While the tides had been turning against Leto for a few years now, the chickens really came home to roost over the last 16 months or so courtesy of truly awful turns in both House of Gucci and Morbius (perhaps the most meme’d movie ever made).

As a result, movie fans are finding themselves wondering how on earth Leto is still getting high-profile parts, particularly following reports that he’ll be starring in a new Tron film titled Tron: Ares.

tron fans getting a sequel but it stars jared leto pic.twitter.com/LCMHxMKmzO

Me asking for more Tron and getting Jared Leto. https://t.co/pra7MnCxtk pic.twitter.com/vga8TrqFq4

The reactions to the news of Leto starring in the next Tron movie were largely negative across the board:

Fans celebration for a new Tron movie ended the second that they learned that Jared Leto would be starring in it
pic.twitter.com/AxTIfadSyt

One Twitter user cleverly tried to direct people to information about Jared Leto’s allegedly seedy past:

OMG! Apparently Jared Leto has wanted to be part of the Tron franchise since he was 13! Google "Jared Leto 13" for more info! https://t.co/iAUHXnJTIG

According to reports, Norwegian filmmaker Joachim Rønning — who has previously helmed Disney projects such as Maleficent: Mistress of Evil and Pirates of the Caribbean: Dead Men Tell No Tales — is set to direct.

The first one wasn’t more than a cult favorite, though its special effects were seen as game-changing at the time. That following swelled around the film in years to come as it played on cable only helped grow its popularity, to the point where Disney decided to move forward with a sequel, Tron: Legacy, in 2010, with Bridges reprising his role and Garret Hedlund and Olivia Wilde joining the franchise.

The Tron: Ares script is by Jesse Wigutow and is considered the sequel to Tron: Legacy, which was directed by Top Gun: Maverick‘s Joe Kosinski. [via Deadline]

RELATED: Someone Showed Up To The Met Gala In An Outfit So Absurd That People Simply Assumed It Was Jared Leto (It Wasn’t)