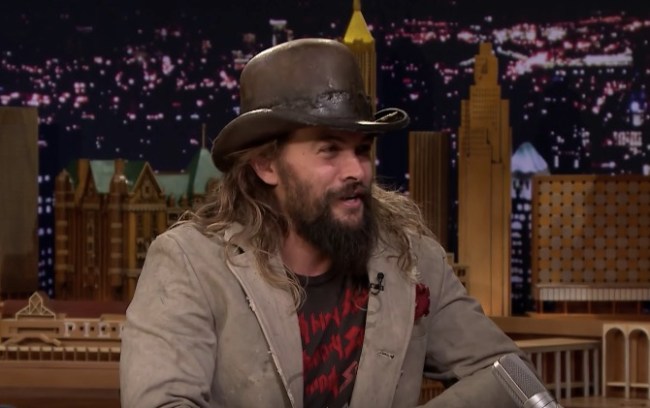 Jason Momoa hit the acting scene by getting cast as Khal Drogo on HBO’s Game of Thrones in Season 1, the wife of Daenerys Stormborn and a Khal (leader of a Dothraki Khalasar). Before his untimely demise, an act that sent Daenerys/Khaleesi on a path of badassery, Jason Momoa‘s character was a fan favorite and one of the most powerful dudes on TV.

One of the more memorable aspects of Jason Momoa’s role as Khal Drogo was that he didn’t speak English in Game of Thrones but instead spoke Dothraki, a language created for the TV show and books. Jason Momoa was born and raised in Hawaii. English is his native language. So when his tenure on HBO’s Game of Thrones came to an end after Season 1 he expected to be landing new roles left and right.

He eventually scored the role of Aquaman, Conan the Barbarian, and the Netflix TV show Frontier but he had a lot of trouble getting hired because nobody in Hollywood thought he spoke English. Jason talked about this last night while appearing as a guest on The Tonight Show Starring Jimmy Fallon where he was totally geeking out over his love of SNL which led to the revelation that people thought he couldn’t speak English after Jason met Fred Armisen: