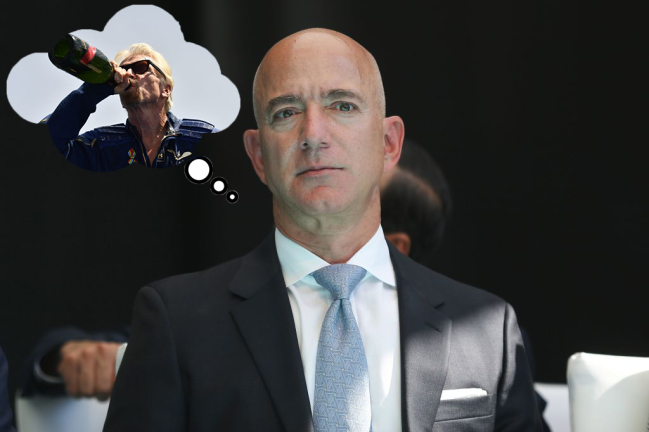 Branson and five employees set off from Spaceport America in New Mexico around 8:30 a.m. on Sunday July 12. Less than an hour later, the Virgin Galactic rocket was released at an altitude of 53 miles.

NASA and the United States consider a 50-mile altitude to be the boundary of earth and space. At that 53-mile point, Branson and his team became the first private citizen spaceflight.

The crew and passengers were able to unstrap and experience weightlessness upon entering space. In that time, Branson gave an epic (but very corny) speech.

The rocket and those on board glided back down to space at 9:40 a.m., just over an hour after take off.

You can see an entire video recap of the journey here. It’s surreal.

Branson’s successful flight is monumental. He plans to commercialize space travel— for the low cost of $250,000!

The entire concept is really cool. Who wouldn’t want to take a day trip to space?

However, there is a long way to go before it will be accessible for anyone that isn’t filthy rich. If ever…

The promise of suborbital tourism is something that has been in the works for a few years now. Branson, worth $5.9 billion (with a B), has been furiously racing against both the clock and fellow billionaire Jeff Bezos.

Elon Musk is also in the mix, but he is pivoting in a slightly different direction. He is looking to send people to stay in space for an extended period of time.

Branson just wants to get there— and he did. The Virgin Group founder originally had his first launch scheduled for later this summer.

…but then Bezos announced that he would take flight to space on July 20.

In response, Branson bumped his suborbital trip to July 10. He won the first leg of the space race by 10 days.

After taking the loss, Bezos posted a congratulatory instagram to Branson, but it couldn’t have been less enthusiastic.

“Richard Branson and crew,” he said. “Congratulations on the flight. Can’t wait to join the club!”

The best part of the post was that he didn’t post a photo of Branson or his rocket. Bezos posted his own plane to remind everyone that he was doing it too.

I know you can’t literally hear an instagram post, but you can hear the defeat in Bezos’ voice through the screen. Tough beat, Bezos.