Jeff Bezos Makes Historic Space Flight, But All Many Noticed Were The Dr. Evil Similarities 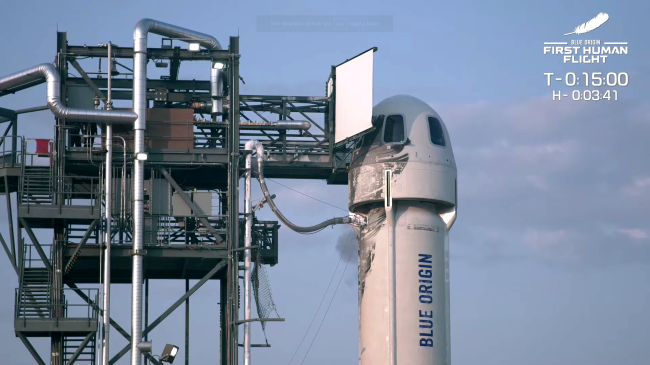 Well, he did it. The richest man on the planet, Jeff Bezos, successfully flew to space and back. Much to the chagrin of around 200,000 people.

Yes, Bezos did lose out on being the first billionaire to go to space thanks to Sir Richard Branson and his Virgin Galactic rocket, but he was still very fired up about his accomplishment nonetheless.

“Happy, happy, happy!” Bezos said once he reached space on Tuesday in his Blue Origin New Shepard rocket. “You have a very happy crew up here!”

“Best day ever,” Bezos said after touching down seven minutes after taking off in the West Texas desert.

Bezos and crew are taking solace in the fact that they claim his Blue Origin rocket ship flew higher than Branson’s, above the Kármán Line – 62 miles (100 km) above the Earth’s surface – what Fédération Aéronautique Internationale considers to be the dividing line for going into space. Branson’s Virgin Galactic rocket only flew above 50 miles – what the FAA recognizes as the boundary of space.

Only 4% of the world recognizes a lower limit of 80 km or 50 miles as the beginning of space. New Shepard flies above both boundaries. One of the many benefits of flying with Blue Origin. pic.twitter.com/4EAzMfCmYT

Also on board Tuesday’s historic space flight were Jeff Bezos’ brother brother Mark, 82-year-old Mary Wallace “Wally” Funk (the oldest person ever to go to space), and 18-year-old Oliver Daemen (the youngest to ever go to space). Daemen won his seat in an auction when his dad, who is the CEO and founder of Somerset Capital Partners, bought it for him.

None of that mattered to many on social media, however, as numerous viewers simply could not shake the image of Bezos’ Blue Origin New Shepard rocket looking like, well, a flying penis.

Bezos going to space in a penis pic.twitter.com/XNkEYtPW6Q

I just watched Jeff Bezos fly into space in a dick-shaped rocket several months after getting a divorce. Billionaires' midlife crises are messed up, man.

Nor could many watching the space flight get over the fact that Jeff Bezos and his Blue Origin New Shepard rocket sure reminded them a lot of one Dr. Evil.

I can’t even with this Jeff Bezos (Austin Powers) rocket. pic.twitter.com/1Ep10vByh8

Someone had to do it 😁🚀 🍆 (jeff bezos x austin powers) pic.twitter.com/BwnYlg5JwT

So I guess the question of whether Jeff Bezos is more of a Lex Luthor type of supervillain or a Dr. Evil has officially been answered.