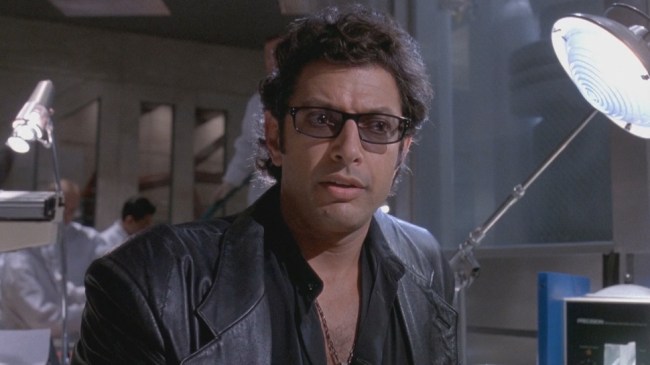 A Jurassic Park without Jeff Goldblum’s Dr. Ian Malcolm character would certainly not be the classic movie that it became. However, Goldblum revealed that his leather jacket-wearing chaos mathematician character was nearly cut. That is one big pile of shit.

In an interview with Vanity Fair, Goldblum explained that his iconic cinematic character was almost ousted from the 1993 dinosaur flick. “I got a call… ‘Steven Spielberg wants to meet you… read the book first’… [so I] read that Michael Crichton book [and thought] ‘Ian Malcolm… wow… smart, funny, interesting character’… [Spielberg] was so nice,” Goldblum recalled. “He said, ‘Ya know, there’s a sort of movement afoot with our little committee here, as we’re rewriting another version of the script, to have that part removed from the script. So since we’ve had this meeting, there’s this little wrinkle that may render this moot.’ I kinda said… I felt like I had to advocate for my inclusion.”

Goldblum said the writing crew working on the Jurassic Park script was leaning towards melding Dr. Ian Malcolm and Alan Grant characters into one to simplify the plot. “Anyway, it turned out that I got to be in it,” Goldblum said. Disaster averted. Malcolm became a key character and actually became the primary protagonist in 1997’s The Lost World: Jurassic Park II. Fast forward to 2018, and Jeff Goldblum’s Dr. Ian Malcolm character will be in Jurassic World: Fallen Kingdom.

The video also revisits Goldblum’s movie career, from his first role in Death Wish to his current film, Isle of Dogs.