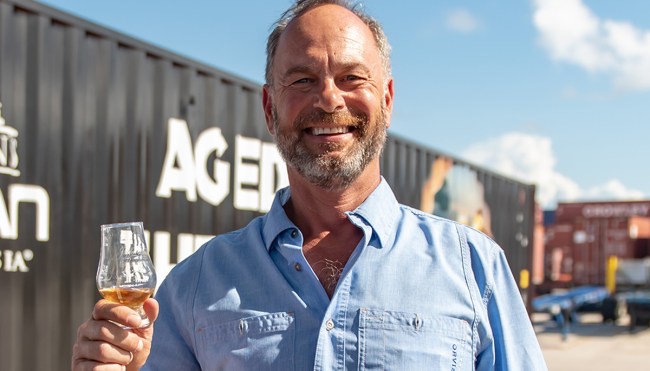 The Great Whiskey Boom that began around a decade ago has been both a gift and curse for fans of the spirit; it might be easier than ever to track down some truly phenomenal bottles, but there’s a very good chance you’re going to have to shell out more than you’d prefer for a lot of them thanks to drinkers who will spare no expense when it comes to securing the likes of Weller, Blanton’s, and Pappy Van Winkle.

It’s safe to say the landscape has changed just a bit since Trey Zoeller got in the game around 25 years ago. In 1997, the Kentucky native released his first batch of Jefferson’s Bourbon, and there’s no better way to sum up the scene at the time than an anecdote concerning what went down when he headed to a festival with Julian Van Winkle (a.k.a. the man behind the Pappy line) a couple of years later:

“We split a table because we couldn’t afford one on our own. You could buy five cases of Pappy Van Winkle and get a case of Jefferson’s Reserve for no charge (or the other way around).

We didn’t sell a dozen deals between the two of us. We couldn’t give it away.”

I recently got the chance to chat with Zoeller following the release of Jefferson Ocean Rye, which is the latest offering from the man who once decided to see what would happen if you threw a barrel of bourbon onto a research vessel as it traveled around the world (spoiler: you get some really, really good stuff).

During our conversation, the mastermind behind Jefferson’s detailed how he got into the whiskey game in the first place, the real reason the spirit has been Having a Moment with seemingly no end in sight, and how he’s continuing the push the limits to bring the liquor into the future while still paying tribute to the past.

BroBible: Can you give me a bit of a crash course on how you first got involved in the industry?

Trey Zoeller: Growing up in Kentucky, everybody drank bourbon. I never thought about it because it was just there.

It wasn’t until I moved outside of Kentucky that I realized people outside of the Bourbon Belt didn’t drink bourbon—specifically in the early 90s. Being a proud Kentuckian, I drove people crazy. “You don’t drink bourbon? You’ve got to drink bourbon! This stuff is great! Single malt? That stuff sucks! It tastes like dirty socks”

When I got into the business in 1997, the industry was in a 30-year decline, which gave me a lot of opportunities because there was some great stock of tremendous old whiskey out there.

In the early 1990s, my dad was on a plane and picked up the in-flight magazine. In the back of it, there was an ad to buy a barrel of Bushmill’s Irish whiskey, so in 1993, he and four friends each threw in $1,000. They gave them a three-day trip to Ireland where they played some golf and toured the distillery and had a blast.

I was like, ‘If you can buy a barrel in Ireland, why can’t we buy bourbon from our friends in Kentucky?’ I just started knocking on doors. At the time, there were only eight distilleries in Kentucky and ten in the entire country that were making bourbon.

I saw this opportunity to start buying some of this old whiskey. Single malt scotches were really starting to take off, but I thought bourbon was so much better. Nobody was really doing high-end stuff. Julian Van Winkle was bottling up some product—maybe 1,000 cases a year—the Willets were producing, Blanton’s had come out, but that was really it.

When did the tides begin to turn and, more importantly, what factors do you think played the biggest role?

What most people would say to explain what happened is the “Don Draper Effect.” However, when the economy turned south in 2008, people were looking for value. Bourbons were unbelievably inexpensive. At the same time, people were dusting off old cocktail books that were filled with recipes using bourbon, rye, and cognac as bases.

If you ask me, the internet played a huge role. People could start geeking out about bourbon; really digging in and finding out the differences between brands and what’s going on at different distilleries. At the time, vodka was king, but when people really started getting more information, they loved being able to take a bottle over to somebody’s house and tell them the story behind it.

“Blending” can be sort of a dirty word in the whiskey industry, but it can create some fantastic stuff. That’s also how you initially got your start. Did you ever feel like you had a bit of a chip on your shoulder?

Really, I was too dumb to know better. I got the chance to try some of this great, old whiskey that was available then. I would buy these small, esoteric lots of bourbon and blend them together; sort of like a winemaker. I thought the whole was better than the parts. You got more balance and more complexities that way.

When I started buying these little lots of bourbon—coming out with Jefferson’s Reserve and Sam Houston—I was just doing one age and one recipe. Then, I was like, “I can make these things better by bringing them together.” I was blending at a time when people look down their noses at it. Today, it’s being heralded.

It’s been around a decade since you got your hands on the first batch of ocean-aged bourbon. What was that process like?

When we came out with Ocean, you had some diehards who were like, “This isn’t Kentucky bourbon. It’s not aged in Kentucky!” when it actually was for six years before we put it out on the ocean. There will always be purists who will be mad if you’re not doing it exactly like everybody else that are going to push back.

The first voyage we ever did we put new fill on a ship for three-and-a-half years. It came back and it was black and the viscosity was like oil. Since then, we haven’t been able to get it over eight months. I can’t find a voyage longer than that, so we haven’t hit the official point where you get negative returns, but it certainly would happen at some point.

Once the boat leaves, it’s gone, and I don’t taste it until it comes back. That’s usually six to eight months. It’ll travel to 30 ports on five continents and cross the equator four times over that span. You’re getting a lot of fluctuation of temperatures in addition to the movement.

Did you have to adjust it all when it came to harnessing it to producing a rye?

Ryes tend to have a lot of spice up front and then get really dry on the back. They also typically have less wood than you would find in bourbon. I was afraid that simply putting it out on the ocean like we usually do would give it too much wood and not really balance well with the spice of the rye.

I wanted to give more texture to it. That’s why we double-barreled it. We aged it four to five years and double barrel it—75% of which goes into a Char 3 barrel and the rest of which goes into a toasted barrel. I didn’t want to make that toasted flavor the dominant flavor.

What I wanted to do—and what I’ve done with other ryes—is make them sipping ryes; one that will really stand out in a cocktail but you can still drink neat or on the rocks. I’ve had a lot of this on the rocks in the past couple of months, and I can tell you it holds up very well.

The nature of bourbon means producers have to use virgin American oak barrels for aging, but there’s been a fair amount of innovation when it comes to experimenting with different types of wood in recent years. I know you’ve done a fair amount of tinkering in that realm and I’m curious to hear what you’ve learned.

The majority of what makes bourbon what it is comes from the maturation process—that’s where the majority of the flavors come from—but when you look at it, basically everyone matures bourbon the exact same way.

My primary vision has been to take things other people have made and either make them better or push them in a different direction. I was able to do that through blending, but I also had two big “Aha!” Moments that happened around the same time.

In 2012, we got that barrel of black bourbon back off of the ocean for the first time and I saw how much it had changed because of the environment and the agitation. Around the same time, Independent Stave Company—which is the largest cooperage in the world—was celebrating its centennial and invited me to its corporate office in Missouri to be a barrel chef for a couple of days.

I got to make different barrels for the wine, cognac, and other spirits and it made me think, “Why is bourbon so rudimentary where all we’re doing is four different levels of char?” It turns out Independent Stave has learned a lot over the course of more than 100 years. Technology has helped advance every industry you can think of, but bourbon basically said, “Nope. Don’t mess with anything. This is it.”

Take our Twin Oak Project. We’ve done hundreds of experiments looking at variables like times and temperatures, which led to the creation of a proprietary barrel we’re currently finishing some eight-year-old bourbon in. The barrel was extra-seasoned and left out in the yard for 15 months. Then we grooved it so it had twice as much surface area, used a flash char to open it up, and then toasted it to bring out these mocha flavors.

The guy who put our distillery together, he’s one of my favorite people because he always told you what he thought at all times. He was there the first time we took it out of the barrel after four months—we were planning to go longer—and he said, “I don’t buy into that marketing bulls—t but this is the bourbon I want to be buried with.” We emptied the barrel the following morning.

Do you have to consciously toe the line between innovation and tradition or is it something that happens fairly naturally?

I personally have a long history with my family. My eighth-generation grandmother was arrested for moonshine bootlegging in 1791, which makes her the first documented woman in the American whiskey business. I grew up in Kentucky. I love traditional bourbon.

What I always say is we’re trying to push the boundaries of what bourbon is while always tipping our hat to tradition. Every time I’m pushing it, I’m putting more time, money, and effort into it to try to make it better—whether it’s putting it into a new barrel or out on the ocean.

I’m doing this all after it’s fully matured. I could put it out on the shelf and be very proud of it instead of doing all of this extra stuff. I’m not trying to cheat the process, I’m trying to enhance it. I think when you do that, you’re being a great steward of bourbon.