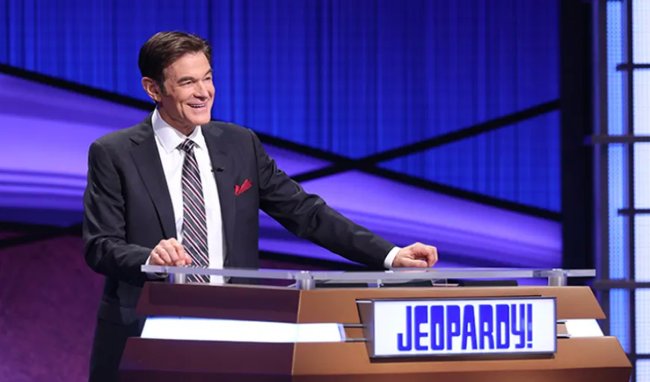 There have been several fill-ins on the game show Jeopardy! since the passing of beloved host Alex Trebek including Ken Jennings, executive producer Mike Richards and Katie Couric.

This week began a two-week run for another new guest host: Dr. Mehmet Oz, who will be supporting the charity HealthCorps during his stint.

We are excited to share that America's Favorite Quiz Show®, @Jeopardy!, will be matching the contestant winnings and donating them to HealthCorps as a part of @DrOz's two-week appearance on the show!
Click here to find your local station: https://t.co/8AXFxmTkbN pic.twitter.com/zS22QwUHwQ

“Never in my wildest dreams thought I’d be able to come on this stage and host the show,” Dr. Oz said it was announced he would be a guest host. “Jeopardy! takes it to a whole new level. It’s just special. It’s iconic in the psyche of America.”

Apparently, Dr. Oz isn’t the only Jeopardy! fan out there who was left shocked by his inclusion as a Jeopardy! guest host.

It would seem that a lot of Jeopardy! fans have watched The Dr. Oz Show and don’t appreciate his special brand of medicine. As a result, a #BoycottJeopardy movement has sprung up on social media and it is spreading like wildfire.

Not that the folks who run Jeopardy! didn’t know this was coming. A month before his hosting, a group of former Jeopardy! contestants and winners published an open letter on Medium in protest.

Dr. Oz stands in opposition to everything that Jeopardy! stands for. Jeopardy! is a show that values facts and knowledge. Throughout his nearly two decades on television he has used his authority as a doctor to push harmful ideas onto the American public, in stark contrast with his oath to first do no harm. These ideas include promoting supplements that do nothing, legitimizing gay conversion therapy (which is banned in California, as well as 19 other states), dangerous “cures” for autism, and, most recently, the use of hydroxychloroquine as a treatment for COVID-19. None of these things is backed by any scientific fact and by promoting them he is actively putting his viewers in danger. In fact, his ideas are so dangerous that thousands of his colleagues have petitioned to have him fired from his position at Columbia Medical School.

As should have been anticipated, reactions to Dr. Oz’s appearance have not been great this week.

I am a loyal, diehard @Jeopardy fan. But I am boycotting the show for these two weeks due to your select of @DrOz as guest host. Jeopardy is about facts, Oz is not. Looking forward to the other guest hosts! @andersoncooper !!!! #BoycottJeopardy

I have watched & loved Jeopardy for more than 40 years. I have encouraged dozens of young people to take up watching. But Monday evening when Dr Ox came on, I felt sick. A TV shyster, who is raising fund for his own charity. What a self-promoting, phony. @#BoycottJeopardy

Dr. Oz is a schizer, a schill and a dangerous snake oil salesman. The biggest slap to the face of Alex Trebek’s memory that I could imagine. I love Jeopardy but, this week? I’ll #BoycottJeopardy

@Jeopardy - Dr. Oz?? No thank you. Advertisers should know that many will be boycotting during his guest host stint. #BoycottJeopardy

@MRichTV I SEE U DON'T CARE ABOUT UR SUPPOSED FRIEND ALEX TREBEK OR THE FANS OF THE SHOW I GAVE U A CHANCE WHICH I SHOULDN'T HAVE BUT @DrOz IS AN EMBARRASSMENT TO DOCTORS, MEDICIAN , JEOPARDY LOVERS AND HUMANITY NOT TO MENTION THE TRUTH #BoycottJeopardy UNLESS THEY ANSWER

#Boycottjeopardy. $$going to his own charity! What's wrong with this picture?