‘Jeopardy!’ Legend Ken Jennings Hints That A Showdown With James Holzhauer Is ‘Inevitable’ 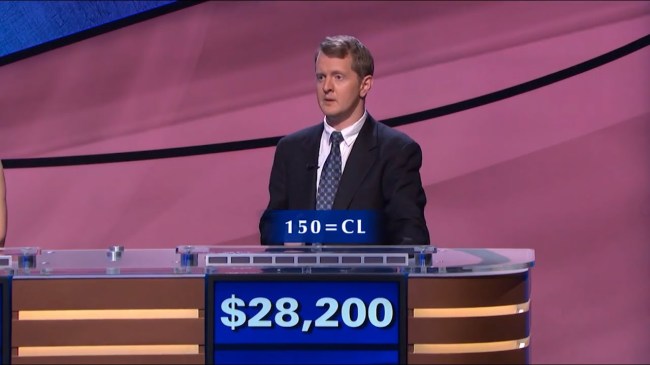 Jeopardy just lost an all-timer the other day, when James Holzhauer was defeated for the first time in 33 total appearances, which ended his chance at becoming the show’s highest-earning contestant — but the dude still racked up over $2.4 million. While the world mourns Holzhauer’s loss on the show, the man who scooped up the most money ever on Jeopardy, Ken Jennings, says he’s ready to go toe-to-toe with the whiz kid soon, even going as far as saying it’s “inevitable” to happen.

Talking to Good Morning America this morning, Jennings discussed a possible return to Jeopardy, even joking about how Holzhauer might have the edge given the age gap between the two. Take a look at what the all-time champ had to say.

“It’s got to be inevitable.

“But ‘Jeopardy!’ only does those special tournaments so often,” he added. “And obviously I can’t get 29-year-old Ken to show up with his sleek, 29-year-old brain, it’s got to be me with my broke down brain.”

Guys, if this happens, it’ll be the greatest head-to-head competition on TV since, well, ever. Forget a third contestant, just put these two against one another and extend the episode of Jeopardy by five hours, because people will absolutely tune in to see who proves to be the biggest brainiac of all.

Although fans will have to wait (and hope) that a Jennings-Holzhauer showdown happens, the all-time champ added praise for the new kid on the block, squashing any early trash-talk.

“It seemed like he might be the guy, the chosen one, so I was very excited,” he said. “I wanted to see it come down to the wire, I wanted to see if it could be beaten because I think it can be done.

“He was so close to the cash record,” Jennings added. “And it just shows how fragile a ‘Jeopardy!’ streak is.”

“Watching James on that show, he feels as close to Watson as you can get and still have a pulse,” he said. “My guess is playing against James is going to be a lot like playing against Watson.”

There seems to be a lot of respect between Jennings and Holzhauer, which is good for now, but get these two on the Jeopardy panel and let’s see them bury one another once the answers come flying their way. Uh, what is let’s definitely make this shit happen for $1,000, Alex?