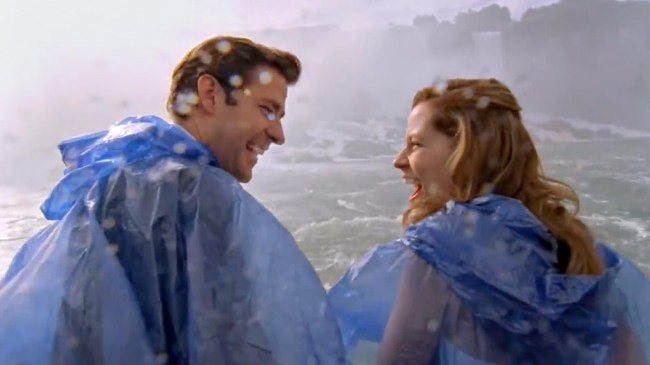 It’s been 10 years since the wedding episode of the television couple who created relationship goals so outlandish it broke up half of America’s families.

The hourlong, two-part episode was titled Niagara and aired during the sixth season of the comedy series and was polled as the second best episode of the series after the second-season finale, Casino Night, the first episode written by Steve Carrell.

Niagara could very well have supplanted Casino Night as the best episode Office of all-time if executive producer Greg Daniels had his way with the script and wasn’t adamantly overridden by co-writers Mindy Kaling and Paul Feig.

The three spoke with Entertainment Weekly about the controversial “dark and weird” alternative ending that would have taken the joyous-leaning episode in a morbidly hilarious direction.

FEIG: All throughout the episode, Roy’s [David Denman] been kind of haunting around and unhappy that they’re getting married, so when they ask if anybody has reason why this couple can’t get married, he rides into the church on a horse to sweep Pam off her feet like a knight in shining armor and declares, “I have an objection.” And she’s like, “What are you doing? No, I want to get married.” She sends him away, so he has to ride his horse back out of the church. But then, in an absolute insane thing, they had this crazy ending where Dwight [Rainn Wilson] gets the horse and rides it into the falls.

DANIELS: I was really committed to the horse for the longest time. [Laughs] It was like Dwight got fascinated with this historical display at the hotel that talked about various animals. It started with a cow had been swept over the falls and survived, and then a couple of people tried to go over the falls in a barrel and were killed, and then some sheep went over the falls and survived. And he came up with this theory that you could survive going over the falls if you were riding a horse, because a horse would have the instinct of how to swim properly. And so he was trying to get people to listen to this theory, and then Roy interrupts the wedding trying to do a big, grand romantic gesture that nobody wants and just abandons the horse and drives home. So Dwight gets on and goes into the river above the falls, but panics and jumps off the horse at the last second, while the horse goes over in the background of the wedding. I remember scouting this tank on the Universal lot and talking about how we’re going to shoot this horse being swept over the waterfall. Then we got to the table read and I was the last defender of the horse. The entire staff and actors were yelling at me: “Don’t ruin Jim and Pam’s wedding with a horse!”

FEIG: We were all like, “This is insane. You can’t send a horse over the falls.” And Greg was like, “No, it would be really funny.” And there was this whole debate that went on in the writers’ room, people are like, “I don’t know, I think this is kind of dark and weird.”

DANIELS: I finally backed down and took the horse out.

I would have shit my pants with laughter if this had been made. I’m cackling to myself just reading it.

The only issue I’d have with it is that it isn’t realistic. If Roy showed up on a goddamn horse, she’d definitely leave Jim at the alter with his dick in his hand. Why? Because Pam is EVIL…

Pam…
Cheated on Roy
Led Jim on for years
Jealous of Katy
Back w/ Roy but awkward about Karen
Lied to coworkers and management about Office Administrator position
Jim supported her dream, she asked him to give up on his
Harrassed Danny
Had emotional connection w/ camera man…

I shouldn’t be so pessimistic. Let’s focus on the good times!