Jim Carrey Refuses To Take Selfies With Fans, And His Reasons Why Are Actually Pretty Refreshing 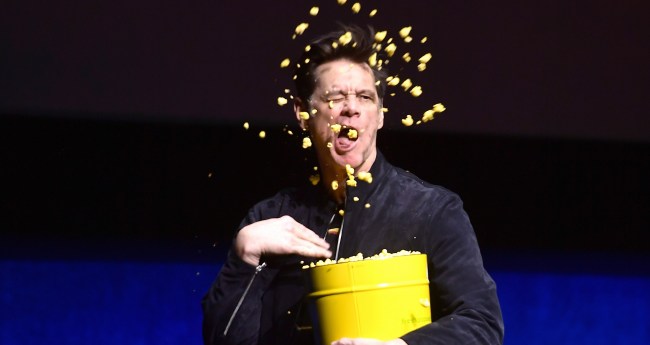 The topics these geniuses of joking covered ranged from navigating fame and success and Hollywood’s former drug culture to what they would do if they could be anonymous for a day and what actually went into Sacha Baron Cohen’s failed attempt to get O.J. Simpson to confess to the double murders on camera.

In other words, it was a fantastic discussion.

The stars of the roundtable were, as one would expect, Cohen and Carrey.

For example, when asked why he acts, Carrey’s response was music to Ted Danson’s ears.

Carrey: “I act because I’m broken in a lot of pieces and acting gives me a chance to reconfigure those pieces into a thousand different things that are positive for people to watch. And eventually I will be ground down into a fine powder and …”

Cheadle: “Snorted? Is that how you want to go out?”

Winkler: “For those of you who are watching [this discussion], there is a guide that you will get in the mail for Jim’s answers.”

Danson: “That was clear as a bell. And remarkably truthful.”

Danson: “I’m with everyone else. A little bit broken, not badly, and wouldn’t know what else to do, literally. And, hey, [acting is] a noble fucking profession. I do think we’re curing cancer. It’s an amazing thing to make people laugh.”

Cohen later said that he “was scared of becoming famous” because he “couldn’t really see the great upside other than if you were single as a guy you’d generally be able to date girls who were better looking than you should’ve been able to date.”

When discussing how ridiculously famous Carrey has become with his ife always on display for public consumption, he said that everything said and written about him is “90 percent myth” and a “creation” that he had to learn to let go of, but even then that wasn’t good enough.

“I ultimately found that even the me I created wasn’t real, so that left me in an odd situation,” explained Carrey. “Many of the things I do have to do with the disappointment of creating a winning personality in the world and then, eventually, for your own sanity and freedom, letting it go. I mean there’s The Fonz sitting right here who can speak to that.”

“What you’re saying is exactly right,” Winkler responded. “And people come to you thinking you are other than you are. And it’s like a drug, you want to believe you can walk on water. You have to just hold on and realize you are not any taller, you don’t know math any better, you are not smarter because people think you are wonderful on TV or in the movies.”

One of the most interesting parts of the discussion came when it turned to the question of what they would do with anonymity for a day.

Danson said he would “pass out” from no one recognizing him. Cheadle and Cohen said they still have some semblance of it. And Jim Carrey said, “I have it when I sleep.” To which Cheadle replied, “Yeah, yours is trickier.”

Carrey continued on, and gave a very interesting explanation for how he handles meeting fans, and in particular, fans who want to take selfies with him.

“I dropped the whole trying to be something for somebody a long time ago. I don’t feel there is a pressing responsibility to please everyone,” he said “I’m not unkind to people, but I would much prefer saying hello and who are you and what are you doing today to giving a selfie. Because selfies stop life. You go (contorts his face), “Eeehh.” And then it’s going on Instagram to give people a false sense of relevance. Everybody was so gaga about Steve Jobs, but I picture him in hell running from demons who want a selfie.”

The rest of us just picture him in hell for a whole host of other reasons.

And yes, rather than actually creating a memory by being in the moment with other humans, many people prefer to create a memory by taking a photo of it that will get posted to social media once and then sit in a digital file untouched forever. So, what Carrey says about his interactions with fans actually makes some sort of sense and is definitely food for thought.

Check out the entire discussion between these six comedy wizards over at The Hollywood Reporter. It’s a great read.