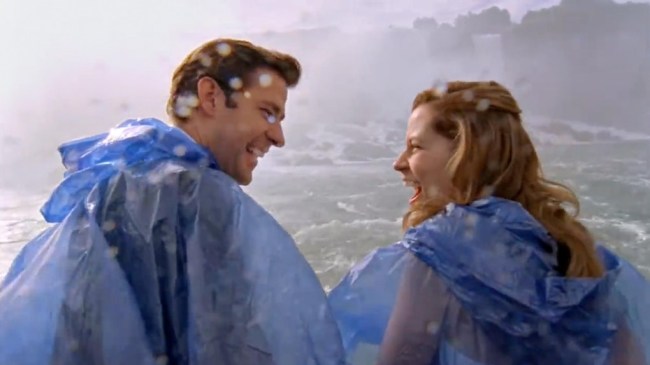 Prior to the collapse of the modern world as we knew it, a tell-all book about NBC’s The Office — The Office: The Untold Story of the Greatest Sitcom of the 2000s — was released.

Written by Andy Greene, The Office: The Untold Story of the Greatest Sitcom of the 2000s “reveals the hilarious and heartwarming untold stories behind one of television’s most iconic shows, told by its creators, writers, and actors.”

While I’ve personally yet to read the book (it’s currently sitting in the “save for later” section of my Amazon cart), I’ve written about tidbits from it quite a lot since the book’s publication:

Steve Carell Reportedly Wanted To Do More Seasons Of ‘The Office’

This latest anecdote tells the tale of how Jim and Pam’s beloved Niagara Falls wedding episode came to be, and how it was originally much more ludicrous than the version fans ultimately got.

According to director Paul Feig, the episode — which was written by Mindy Kaling and co-creator Greg Daniels — almost featured Roy showing up on horseback in knight’s armor in an effort to win Pam back. From there, all hell breaks loose.

“Roy had decided that this whole episode with Jim was really just Pam trying to make Roy jealous to get her back. He thought Pam was really in love with him all along and that he needed a grand gesture to get her back. And so in the story outline, Roy goes to a horse-rental facility, a stable, and rents a beautiful white horse… When she turns around he sees that she’s pregnant and he realizes, ‘Oh, I am deluded. This is crazy. She doesn’t want me, she wants Jim. She’s having a baby with Jim.’ And he would slink away in disgrace.”

On top of that, according to Collider, there’s a subplot that involved Dwight having a “genetic obsession with throwing himself over Niagara Falls”:

“Greg came up with an idea where Dwight has an obsession with the falls and some sort of suicide gene to go over them. He fights it the whole episode.”

“Dwight Schrute, horseman and beet farmer that he is, would then come along after the wedding. He’s walking outside the church and he sees Roy despondent, sitting on the curb, holding the reins of the horse. And he says, ‘Tough luck, buddy, that didn’t work out like you wanted it, did it?’ And Roy would be, ‘No, and I’m stuck with this stupid horse. I paid for the horse for the rest of the day.’ And Dwight says, ‘Hey, I’m a horse person. Let me take care of it.’ He takes the reins of the hose and he’s taking it ostensibly back to the stables, but Dwight somehow finds himself riding along the banks of the Niagara River.”

“They’re riding through the white water of the river and Dwight realizes he’s gotten too close to the edge of Niagara Falls and the horse is looking fearful and Dwight is looking fearful. Dwight finally realizes he’s gotta bail off the horse and swims safely to shore. We cut to Jim and Pam having a romantic moment on the bow of the Maid of the Mist boat, and in the background we see this white horse go tumbling over Niagara Falls, plunging six hundred feet.”

Obviously and wisely, the rest of the staff eventually shot the ide down:

“I remember all the writers were coming to me like, ‘We can’t do this. You can’t kill a horse. It’s crazy.’ Everybody was all over Greg, and Greg was just like, ‘I’m telling you this is going to work.’ He was digging in and everybody was freaking out about it.”

It just goes to show that sometimes making good television is not so much about what you do do, but what you don’t do.