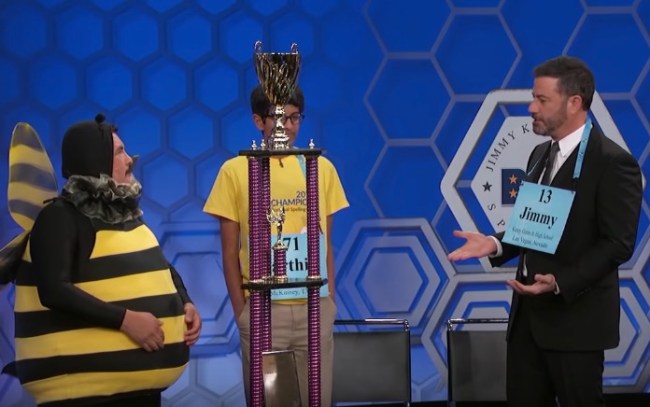 This year, 14-year-old Karthik Nemmani won the Scripps National Spelling Bee in one of the most competitive finals the competition has ever seen. As is tradition, the winner of the Spelling Bee then goes on Jimmy Kimmel Live and squares off against Jimmy in a spelling bee with Jimmy’s sidekick Guillermo as the moderator.

What’s the catch? Well, Guillermo doesn’t read in English. He’s a native Spanish speaker who was born in Zacatecas, Mexico and while he speaks great English he certainly doesn’t read it as well. And it’s clear that Guillermo’s leaning into his role here because even on the off chance he knows one of the words he’s reeeaaaaaallllly laying the accent on thick. I thought that Jimmy would have the slight edge here since he speaks fluent Guillermo and interacts with him every day but I was wrong:

It’s pretty amazing that this kid has an ear for languages to the point that he can translate Guillermo into English, decipher the word in English from whatever language it might’ve come from, and then spell it, all while Jimmy Kimmel is sitting next to him and this is probably the first time in this kid’s life he’s been in a room full of celebrities.