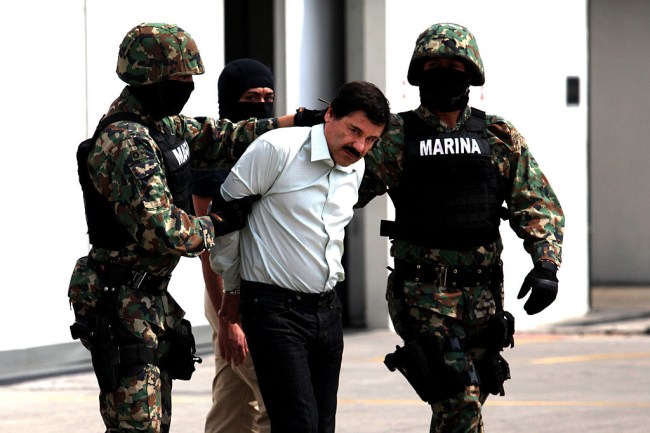 Mexican Navy soldiers escort Joaquin Guzman Loera (front), alias "El Chapo Guzman", leader of the Sinaloa Cartel, during his show up in front of the press, at the Mexican Navy hangar in Mexico City, capital of Mexico, on Feb. 22, 2014. Mexican President Enrique Pena Nieto on Saturday confirmed the capture of the world's most wanted drug lord, Joaquin Guzman Loera, known as El Chapo, in the Pacific resort of Mazatlan. (Photo by Jair Cabrera Torres/NurPhoto) (Photo by NurPhoto/Corbis via Getty Images)

The U.S. government is taking Joaquin “El Chapo” Guzman‘s recent demands very seriously and they believe that the Mexican cartel leader is plotting another prison escape from his NYC jail.

El Chapo, who has been in U.S. detention for 27 months, has demanded to be given outside time. Authorities are concerned with the potential for El Chapo to escape lower Manhattan’s Metropolitan Correctional Center, which is situated between New York’s Police Headquarters at 1 Police Plaza and the United States Courthouse on Foley Square. Especially since there was another attempted jailbreak that happened in the same prison way back in 1981.

“In this case, any outdoor exercise time would be particularly problematic for this defendant,” U.S. authorities said. “The defendant has successfully planned and executed elaborate escapes from two high-security penal institutions. As detailed at trial, one of the defendant’s escapes involved the construction of a sophisticated, ventilated tunnel that stretched for over a mile. Certainly, an escape via rooftop, using a helicopter, or any related means would be elementary by comparison.”

Since the prison is in Manhattan, the only outside area is the rooftop 12th floor of the building, which has the protection of a mesh exterior. One prisoner already attempted a brazen escape from the facility via the rooftop area by utilizing helicopters and officials believe El Chapo is gunning for the same escape.

In January of 1981, a bold prisoner attempted a prison escape from the Metropolitan Correctional Center. Coincidentally, a convicted narcotics dealer was on the rooftop where he took a correctional guard hostage. The perfectly-timed escape saw the criminal try to escape the prison by his escorts in a helicopter by trying to cut through the 20-gauge steel heavy wire mesh covering of the facility.

According to the New York Times, “An armed man and woman hijacked a sightseeing helicopter and flew to the Federal detention center in lower Manhattan yesterday morning in an unsuccessful attempt to pluck an inmate from a rooftop recreation area.”

Rooftop views of the Chicago Metropolitan Correctional Center, designed by Harry Weese in 1975. From a program called “Aerial Cities.” pic.twitter.com/0O9KiUG1WN

The people in the helicopter couldn’t cut through the mesh and instead dropped a 9-millimeter gun to the drug dealer. After a three-hour standoff, the jailbreak was unsuccessful, but authorities still have the prison escape on their minds nearly 30 years later.

In 2012, two inmates escaped the Metropolitan Correctional Center by using bedsheets to lower themselves down from the 17th floor and then hailed cab.

El Chapo is synonymous for his incredible prison escapes over the years in what were said to be some of the most secure facilities in Mexico.

The Sinaloa Cartel leader is wise to attempt to escape from the Manhattan correctional facility since he is likely to be transferred to ADX Florence, the 37-acre supermax prison two hours south of Denver. This fortress of prison is said to be the “prison of all prisons” and a “version of hell.”

Joaquin Guzman has had no difficulty escaping Mexican prisons and his jailbreaks have been well-documented. El Chapo escaped from the maximum security prison Puente Grande in 2011. In 2015, Guzman escaped from the Altiplano Federal Penitentiary.

The U.S. government contends that Guzman has access to “several different types of exercise equipment, including an exercise bike and elliptical, and a vented window that provides the defendant with access to fresh, outdoor air and sunlight.”

Guzman has had other complaints about his stay in the United States including that the light in his prison cell is always on which leads to “serious issue of sleep deprivation.” Critic El Chapo also complained that the air conditioning unit is too loud. I guess he should have stayed at the Four Seasons instead of jail. El Chapo’s lawyers say that the drug lord uses toilet paper as earplugs because the sound is so loud.

But the U.S. government isn’t buying it and responded to the complaints by saying: “The reason for the restriction is simple: If there were an emergency, an inmate would not be able to hear the guards alerting the inmates to the problem. Inmates could also use the earplugs as a ruse to ignore, or pretend not to hear, the guards’ orders.”

In February 2019, the 62-year-old Sinaloa Cartel boss was found guilty on all charges including trafficking cocaine, heroin, methamphetamine, and marijuana into the United States, operating a continuing criminal enterprise, and use of firearms. Joaquin “El Chapo” Guzman will be sentenced on June 25.