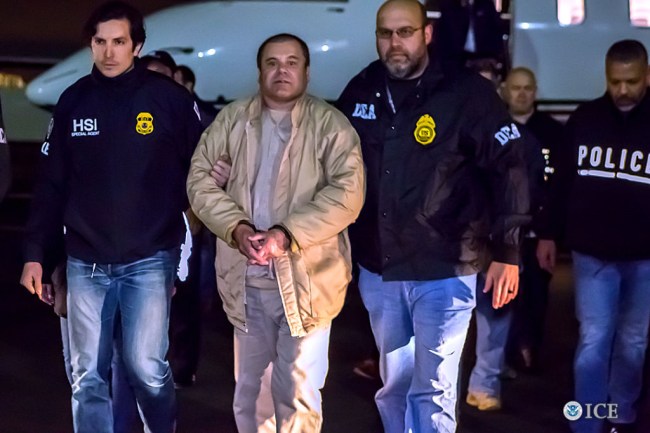 You wake up with a soul-obliterating hangover so you make up some bullsh*t sickness and call out of work with your crackly “on my deathbed” voice. All you have to do is not post incriminating evidence on social media, stay at home and enjoy some hair of the dog elixirs to treat your alcohol-induced paralysis. The next day, you show up to work and everything is great at the office. It turns out that calling out of work when you are employed by Joaquin “El Chapo” Guzman is a little different than calling out of your job at Sysco.

During the El Chapo trial on Tuesday, jurors heard testimony on how the Sinaloa Cartel leader ordered the murder of his own cousin after he called out of work. In December of 2011, El Chapo’s cousin Juan “Juancho” Guzman told the Sinaloa Cartel drug lord that he couldn’t come to work that day because he was out of town. Narrator: “Juan “Juancho” Guzman was not out of town.”

El Chapo wasn’t exactly pleased as a punch when he heard that his cousin, whose nickname is “Virgo,” had lied to him. “My compadre became angry, because he had lied to him,” said Lopez of El Chapo. The Mexican drug lord then ordered his men to kidnap, interrogate and murder his own flesh and blood for lying to him.

I’m guessing that the cousin couldn’t go up to El Chapo and say, “Hey boss, I’m pretty burned out from dodging DEA agents and organizing death squads against rival cartels and politicians, so I’m gonna take a mental health day. You know, so I can go to the spa in the morning, spend the afternoon binge-watching Parks & Rec, and just get my mind right so that I can come back re-energized and refreshed for 100% focus for the rest of the week.”

“[Chapo] ordered [the assassin] to take [Juancho] toward Culican, to kill him, and to leave him on the outskirts of Culican,” Lopez testified. Guzman wanted the murder to “look like revenge for some gangbanger.” Not only did El Chapo have his cousin killed, but also Juancho’s secretary was murdered because he knew too much. “They both have to suffer the same fate,” El Chapo allegedly said in 2011. That corny joke your mom uses about hating to go to work is finally relevant: “I used up all of my sick days so I called in dead.”

Keegan Hamilton, a Vice News reporter who has been doing a tremendous job of covering the El Chapo trial and bringing the highlights to Twitter, posted some updates from the courthouse in the episode regarding Juancho Guzman.

It was a bloody afternoon at El Chapo's trial.

Damaso Lopez testified about at least four murders committed on Chapo's orders, including how the body of Chapo's cousin Juancho was dumped on the side of the road.

We also saw a clip from a gruesome interrogation video.

Damaso also testified that Chapo ordered the killing of his cousin Juan Guzman Rocha aka Juancho or Virgo in December 2011.

We've heard references to this murder before, most notably from Lucero, but Damaso said he was present when Chapo decided to put out the hit.

Damaso said he and Chapo were at a ranch on the outskirts of Culiacan.

Chapo mentioned that Juancho was supposed to be out of town, but Damaso's said people had seen him around.

Chapo was pissed. He ordered his men to snatch Juancho off the street and bring him to the ranch.

Chapo's men arrived with Juancho, and Damaso recalled Chapo asking, "What is that rascal saying?"

Chapo's man replied: ""Compadre, he offered me a lot of money to let him go."

Damaso: "He ordered him to take him toward Culiacán and to kill him and leave him on the outskirts."

Juancho was with his secretary, Guero Bastidas.

According to Damaso, Chapo said the secretary knew everything about Juancho: "Therefore he had to suffer the same fate. They were both killed."

Here's a news article about the bodies being found.https://t.co/8tTYr3F3j8

Juancho was a key player in Chapo's organization — his name has been mentioned repeatedly as somebody who was trusted with coordinating cocaine shipments. He was also family. There has to be more to the story of his murder than Chapo finding out he lied about taking a vacation.

Damaso, who was the lieutenant at the crime organization, starting working with the Sinaloa Cartel around 2001 and even became the godfather for El Chapo’s two daughters. Nunez was arrested in Mexico City in May of 2017 and is testifying against Guzman to get a reduced prison sentence.

Guzman is currently on trial at federal court in Brooklyn for a 17-count indictment including charges of drug trafficking and conspiracy, which he has pleaded “not guilty” to all charges. The moral of the story is to never lie to homicidal drug lords and to make sure that you get a job at a company where you are free to take an occasional mental health day and you don’t have to lie about it.

RELATED: El Chapo Trial: Joaquin Guzman’s Wife Learned How He Spied On Her, Texts He Sent To Sidechicks Revealed In Court