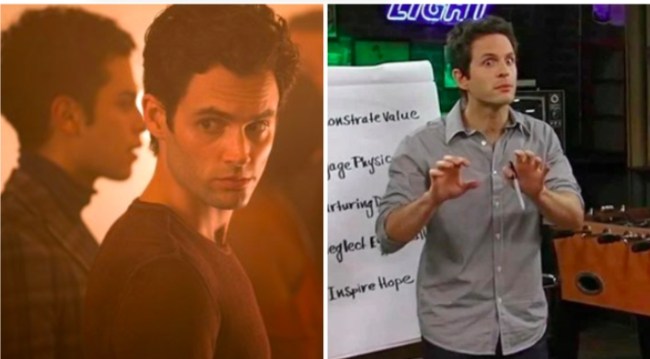 So my girlfriend roped me in to watching this show ‘You‘ on Netflix, which she sold to me as “a Lifetime movie without the old people.” I agreed submissively because I am a neutered man, and thought of this at the very least as an opportunity to scroll through my phone mindlessly and watch fight videos with the volume muted.

Twenty minutes in I was had a clarifying, repairing & soothing face mask on was sipping a glass of Zinfandel while housing a charcuterie board totally glued to the television. You cashes in on all the viewers guilty pleasures–psychopaths and hot chicks and reading! Ok, the reading may be a stretch, but if you haven’t watched the show, it’s like Pringles: Once you pop, the fun don’t stop. Look at me, 9 episodes in and I’m already speaking like a tool.

In any event, many bros who have watched the series are comparing the psychopathic, sociopathic main character, Joe, to It’s Always Sunny In Philadelphia‘s Dennis Reynolds. If you think that’s a stretch, remember that Dennis is the brain child of the D.E.N.N.I.S. System.

This system can be remixed for Joe.

Ok, maybe not as seamlessly.

Regardless, check out all the people convinced these two are blood brothers.

I'm finally watching You on Netflix, and Joe reminds me of Dennis Reynolds, especially from when they were on that ship. #YouNetflix #ItsAlwaysSunny pic.twitter.com/Hn6sPCJcT7

Watching #you I can't help but hear Joe's narrations in the voice of Dennis Reynolds. #iasip #sunny #NETFLIX pic.twitter.com/TXyQeEpCG0

Joe Goldberg from #You is Dennis Reynolds change my mind pic.twitter.com/97bxdYYqCd

I cannot be the only one comparing Joe to Dennis Reynolds from Always Sunny in Philadelphia, surely?! Albeit, a much more realistic and hauntingly terrifying version. 👌🏻 pic.twitter.com/ibvui7RkA1