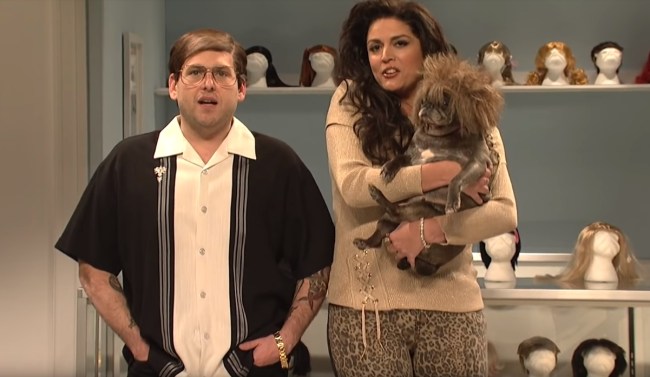 Jonah Hill hosted Saturday Night Live for the fifth time last night and he played a variety of intriguing characters ranging from a 6-year-old Benihana enthusiast, a salesman for wigs made for pugs, an America’s Got Talent contestant, a high school student, and a loser attempting a pathetic marriage proposal.

Jonah’s monologue was centered around The Wolf of Wall Street actor being excited about joining the “Five-Timers Club,” of other celebrities who have hosted SNL at least five times. Jonah was expecting to see Tom Hanks, who has hosted the show nine times, but it turns out that the Five-Timers Club had to jokingly kick out all of the potentially creepy Hollywood actors including Steve Martin (He hosted 15 times), Justin Timberlake (He hosted five times), and Alec Balwin (He hosted the most of anyone, 17 times).

“We have to be really careful about which famous men we let in here,” Barrymore said in the skit. “Tom Hanks from ‘Toy Story’? ‘There’s a snake in my boot!’? I think we all know what that means.”

Hill reprised his role as Adam Grossman, a six-year-old who loves Benihana and often says inappropriate things for a youngster while dining on the hibachi with strangers, but he’s only six-years-old so you can’t get too mad at him.

Here are past Adam Grossman skits and looking back it shows how much weight Jonah lost.

Hill plays Damien Regulanté, the co-proprietor of Pug Wigs, a company that makes wigs for your pug so they’re less adorably ugly.

The Super Bad actor was then a musical contestant on America’s Got Talent. The skit titled “America’s Got Talent: Wait, They’re Good?” lampoons how the judges on singing competition shows who are repeatedly “shocked” when a singer who looks listless suddenly belts out an incredible melody that sounds like the chorus of 1,000 angels.

Jonah was also a loser who attempts to propose to his meteorologist girlfriend while she is giving the forecast on live TV. Unfortunately, he makes the big mistake of wearing a green shirt while proposing in front of a green screen.

Then there was the “Teacher Fell Down” sketch and it appears that you need recreational drugs to understand/appreciate this comedy.