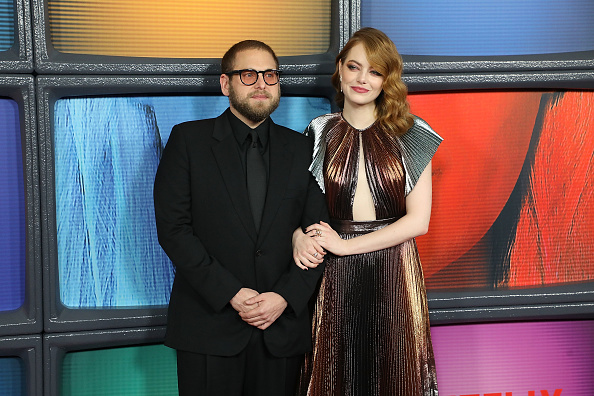 Jonah Hill has been celebrated for his extraordinary weight loss in recent years (as seen HERE). While people have been supportive of Jonah’s incredible transformation, there was a time that the actor was called “fat and gross.” Jonah appeared on The Ellen DeGeneres Show to discuss how the body-shaming really took a toll on his self-confidence.

Hill kept it real about his fluctuating weight and how it negatively affected him when he was younger. “I came in goofy comedies…(as) this kind of curly haired, overweight kid,” he told DeGeneres. “Everyone had their own opinion on what I should be, how they could speak to me, how they could treat me. “

Hill is making his directorial debut with the movie Mid90s and there are parts of the film that are sculpted from his experiences of being an outcast. “I really believe everyone has a snapshot of themselves from a time when they were young that they’re ashamed of,” Jonah said of his adolescent struggles. “For me, it’s that 14-year-old overweight and unattractive kid who felt ugly to the world.”

“This 14-year-old kid, being overweight wanting to fit in with these skaters and hip hop kids… not understanding (his) own worth,” Hill said of the character in Mid90s that depicts the Los Angeles skating scene in the 1990s.

RELATED: We Spoke With Jonah Hill And The Cast Of ‘Mid90s’ About Capturing The Spirit Of A Sacred Era

“To me this movie is about learning to love yourself and finding a community of people that accept you and how imperfect life is,” Hill said. “I’m under construction like we all are.”

Mid90s hits theaters on Friday, the same day that Hill’s new self-published magazine is released. Hill created a magazine titled “Inner Children” that exposes a cruel world of body-shaming and the effects it has on people especially young people who are not developed enough to combat this kind of abuse.

Hill shared an excerpt from the “Inner Children” magazine on his Instagram. “I became famous in my late teens and then spent most of my young adult life listening to people say that I was fat and gross and unattractive, It’s only in the last four years . . . that I’ve started to understand how much that hurt got into my head.”

“This magazine is dedicated to this guy,” Jonah said in another Instagram post with a photo of himself when he was 14-years-old.

The magazine will have contributions from Eddie Falco, Michael Cera, Behati Prinsloo, Kim Gordon, and his sister, Beanie Feldstein, who starred in Lady Bird on “how they learned to love themselves.”

Hill told Ellen that exposing offensive language, misogyny, homophobia, and toxic masculinity was done on purpose. “It’s been really interesting to hold a mirror up to a lot of the things we learned in generations past that we’re now dealing with and facing,” he said.

“It took a long time ― honestly, until right now ― for me to come out as the person, artist, mind, what I represent, how I feel, how I’d like to be spoken to, how I speak to the world,” Hill said, “in a way that actually represents who I am as a person as opposed to me trying to be something else that I’m not.”

Jonah also remarked that he is “deathly allergic” to cats, so allergic that he could die from them.

Never forget the time Jonah gloriously shutdown a reporter who asked him if he was still “considered the fat guy.”