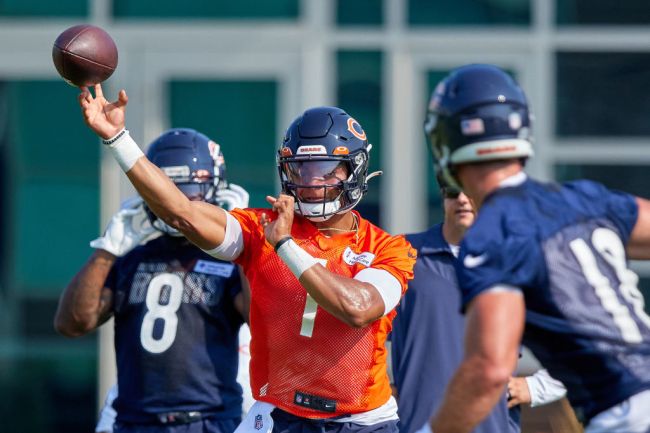 Chicago Bears fans do not know how to behave now that they believe their organization has found its franchise quarterback. Justin Fields enters his rookie season in the Windy City with hopes to become the starter for Week 1.

As of right now, Andy Dalton is QB1 in Illinois, but Fields is making it awfully hard not to give him the keys.

Training camp has been underway for a few weeks now and the Bears are impressed. His work ethic in particular has stood out.

Chicago hosted its first full-padded practice in front of an excited crowd on Tuesday and Fields crushed his audition. He had the fans on the edge of their seats for every single thing he did.

His first play from scrimmage was a handoff and the crowd went nuts. For a handoff.

Justin Fields under center for the handoff. The crowd goes wild! pic.twitter.com/T5VyeDn0on

When it came to his actual game play, Fields was impressive with his legs. And, again, the crowd loved it.

Fans at solider field this afternoon for bears training camp. Here is Justin fields showing off his legs to the crowd.#Bears #NFLTwitter pic.twitter.com/T0TDSVSXa5

The highlight of the day, however, came with an absolutely perfect over-the-shoulder dime. Fields stood in the pocket, stepped into his throw and delivered a dart to the outstretched arms of his receiver Rodney Adams.

It was an absolutely beautiful throw.

When the afternoon wrapped up and Fields finished putting on a show, he took a curtain call. As the 22-year-old ran a lap around the field, those in the stands were beside themselves. Bears fans literally don’t know how to act with a quarterback.

Chicago opens its preseason on August 14 and Fields’ chance to win the starting job really begins.