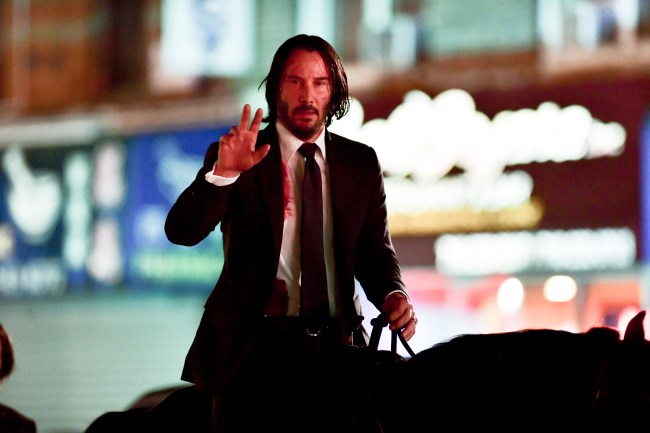 If you type ‘Keanu Reeves nice’ into Google, you’ll be presented with several articles titled something to the effect of ‘Why Keanu Reeves Is The Nicest Actor In Hollywood.’ Reeves donated 70% of his Matrix gains to cancer research and has since opened a foundation in his sister’s name, who has been in remission from cancer since 1999 and who he allegedly shelled out $5 million for her treatment. The dude took a 90% pay cut for The Replacements so Gene Hackman could be in the movie.

Here he is being filmed unknowingly and giving up his seat on the New York subway. This may seem like a minuscule gesture but anyone who’s been to NYC knows that general accepted code of conduct is ‘Don’t make eye contact. Don’t help those in need. Don’t pee on them if they’re on fire.’

The John Wick star demonstrated his character yet again while aboard a United Airlines flight from San Francisco to Burbank. According to Yahoo News, the flight had to divert to Bakersfield because of a mechanical issue, where it landed safely.

As passengers were scrambling to figure out travel logistics from Burbank, the 54-year-old Reeves stepped up to the plate to assist. He arranged for a van to pick up passengers, which he would ride as well, as it was quicker to drive to Los Angeles than it was to fly.

keanu got stranded somewhere in california and had to take a bus instead of a plane and some guy filmed the entire experience and i am BEGGING yall to watch this pic.twitter.com/I1TmLOEYiK

As for the van ride, Reeves was the star of the show.

Along the ride, Reeves dryly read fun facts about Bakersfield to his fellow passengers. “The population is around 380,000…”

Then he put on some “Bakersfield sounds” — country music developed in the 1950s in and around the city — via YouTube.

That time when your flight out from #GDC almost crashes and you have to emergency land in a remote airport but at least Keanu Reeves is having as bad a day as you are. pic.twitter.com/XSPa1wlNuO

I mean, near death experience followed by fans annoying you for pictures. Doesn’t get much worse.

When the first passenger was dropped off, Reeves politely extended his hand and said, “Pleasure to meet you.”