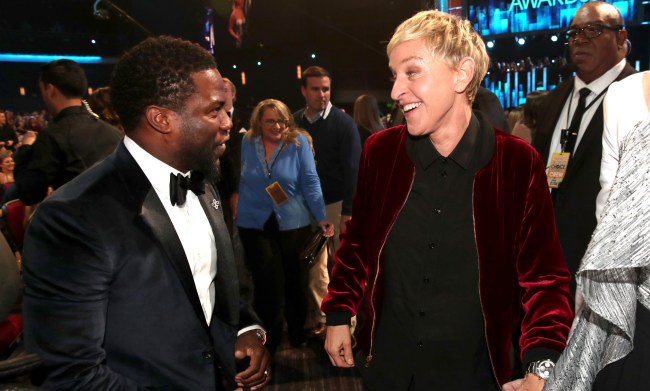 Daytime talk show host Ellen DeGeneres has been having herself a terrible horrible, no good, very bad past couple of months.

Her TV show is under investigation over claims the workplace there is “dominated by fear.” Multiple executives on The Ellen DeGeneres Show have been accused of serious sexual misconduct. And more than one Hollywood star has blasted her for treating people “horribly.”

Not everyone in Tinseltown has been negative towards the Emmy Award winning comedian though. Justin Bieber and Ariana Grande’s manager Scooter Braun heaped praise on DeGeneres following all of the accusations.

And on Tuesday, actor and comedian Kevin Hart took to social media to tell everyone this “hate sh*t has to stop” with regard to people ripping his friend Ellen.

“It’s crazy to see my friend go thru what she’s going thru publicly,” said Hart, no stranger to being lit up by fans and the media for his own scandals.

“I have known Ellen for years and I can honestly say that she’s one of the dopest people on the f**king planet. She has treated my family and my team with love and respect from day 1.

“The internet has become a crazy world of negativity….we are falling in love with peoples [sic] down fall. It’s honestly sad…When did we get here?

“I stand by the ones that I know and that I love. Looking forward to the future where we get back to loving one another….this hate shit has to stop. Hopefully it goes out of style soon….This post is not meant to disregard the feelings of others and their experiences….It’s simply to show what my experiences have been with my friend. Love you for life Ellen…”

Naturally, because his message was seen by many as being completely ridiculous, people went hard at Hart in the comments.

Here comes Kevin with his cape to defend the rich powerful white woman Is anyone really surprised ?🙄

This is about the workers on her show enduring mistreatment and even racism in the workplace, not about her celeb rich friends. Negativity? Nah, accountability.

Meanwhile, The Wrap reports ratings for The Ellen DeGeneres Show have reached an all time low, drawing the same viewership as The Steve Wilkos Show of The Jerry Springer Show infamy. (Paging James Corden?)