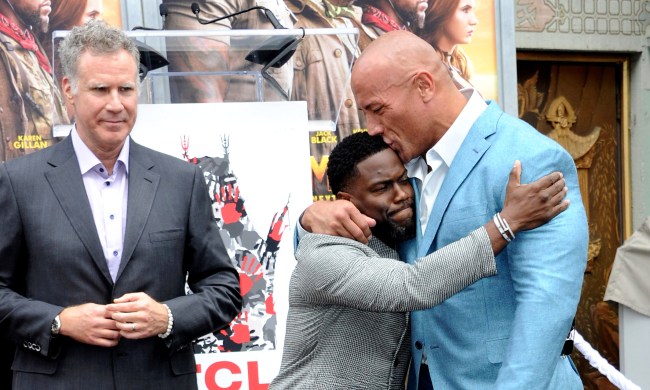 With the Ryan Reynolds vs. Hugh Jackman feud having died down quite a bit of late, their currently is no funnier “feud” in Hollywood better than the one between odd couple Kevin Hart and Dwayne “The Rock” Johnson.

After a couple of months off from publicly trolling each other, Hart fired another shot in their comical war of words on Monday while on the set of his upcoming Quibi series Die Hart.

Standing alongside a stunt coordinator and his long-time stunt double Samuel Jaye Paul, who is of course taller than he is, Hart went through how he planned to perform an impossible leap over a ravine himself and not like the “pussies” who use stuntmen.

“You know what? The funny thing is, a lot of people… you know, the only people that they task with stunts like this are the real deal. Me, Tom Cruise, Harrison Ford… just to name a few,” Hart explained to the camera.

“You know, the rest of those guys are pussies. They don’t do it themselves,” Hart added. “Dwayne ‘The Rock’ Johnson… if they only knew, right? What a bitch.”

Can’t wait to see how The Rock responds to that dig.