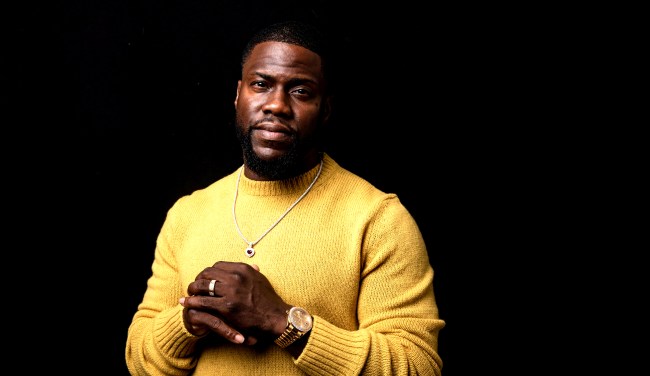 A little under two months since a devastating car accident that required a lengthy stay in the hospital after major back surgery to repair three fractures, Kevin Hart returned to social media on Tuesday with an emotional new video.

In the video, the 40-year-old Hart spliced in photos and footage of the September crash, his recovery which involved using a walker and being helped by nurses just to stand, and the grueling physical therapy he is currently undergoing in his efforts to recover from the accident.

Hart also gets emotional as he talks over the video about all the support he has received from family, friends, and fans, and how he believes the car accident was a sign from God telling him to slow down and appreciate life more than he previously did.

“Basically what you realize is that you’re not in control. No matter how much you think you’re in control, you’re not in control, and at the end of the day, it can all be over, man. You know, when God talks you got to listen. I swear life is funny because some of the craziest things that happen to you end up being the things that you needed most. In this case, I honestly feel like God basically told me to sit down. You know, when you’re moving too fast and you’re doing too much, sometimes you can’t see the things that you’re meant to see,” says Hart.

“But after my accident, I see things differently. I see life from a whole new perspective. My appreciation for life is through the roof. I’m thankful for my family, for my friends. I’m thankful for the people that simply ride with me and that have been with me because you stood by me. My fans, thankful for all of your love and support. So don’t take today for granted, because tomorrow is not a promise. More importantly, I’m thankful for God. I’m thankful for life. I’m thankful for simply still being here, on the road to being a bigger and better me. Looking forward to an amazing 2020.”

At end of the video a doctor tells Hart that his recovery process will probably last a full year. A process that Hart reportedly stated he would be paying for himself, according to TMZ, as he has decided not to sue the driver of the car, Jared Black, or even file a claim with Black’s insurance company.