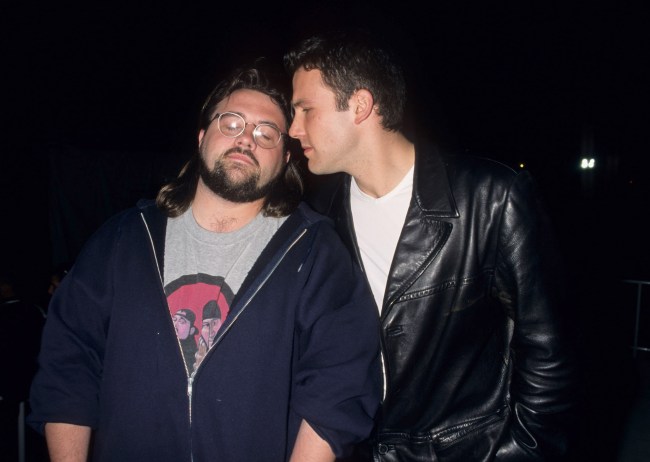 Kevin Smith made Ben Affleck and Ben Affleck made Kevin Smith. The pair collaborated on Mallrats, Chasing Amy, Dogma, Jay and Silent Bob Strike Back, and Jersey Girl, catapulting each other to fame and fortune. Given their history, they should be besties, but they very much weren’t.

The pair’s once close personal and professional relationship had been all but abandoned, with Smith consistently going on the record to reveal that he is “not fucking tight” with Affleck. Last year, Smith shouldered the blame for their falling out, claiming “It’s because one of us has a big mouth and told too many candid stories that sometimes weren’t his to tell, and the other one is Ben.”

Affleck didn’t even reach out to Smith when the director suffered his near-fatal heart attack a year back. Smith didn’t take it personally, saying, “I’m too much trouble.”

Welp, the pair has been reunited by way of the Jay and Silent Bob Reboot, the first movie the two have done together since Clerks II, and all is well in paradise once again.

Smith claims that the two reconnected earlier this year following an interview between Affleck and journalist Kevin McCarthy while the Affleck was promoting Triple Frontier.

“Kev interviewed Ben for his [Triple Frontier] and kicked off by asking Ben, ‘Did they call you for Reboot yet?’ And Ben said no, but he was available,” the Clerks director wrote on Instagram. “So producer [Jordan Monsanto] said ‘Call Ben.’ I told her, ‘That’s just some nice shit to say at a junket. He wasn’t serious.”

Smith then claims he was scared to contact Affleck because he was “scared to be rejected,” but eventually he employed a quote from Conan The Barbarian to break the ice.

“To paraphrase the sad old King Osric in [1982’s cult film] CONAN THE BARBARIAN? ‘There comes a time when the jewels cease to sparkle, when the gold loses its luster, when the throne room becomes a prison, and all that is left is a director’s love for the people he used to make pretend with.’ And after a long beat of wondering how he’d receive this, my estranged friend wrote back as only he could: ‘Of course you still liken yourself to a king,’ he joked. And then, ‘Would be a pleasure to see you again, Old Man.’”

Affleck’s positive response turned a perpetually emotional Smith into a “blubbery mess,” with the beloved director thankful to get his friend back.