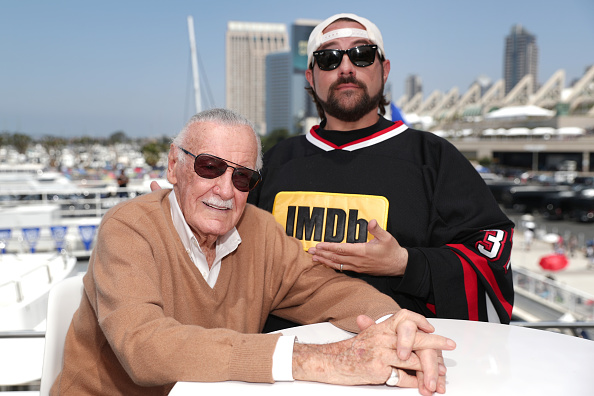 If you know anything about Kevin Smith, you know he is obsessed with comic books and the Star Wars franchise. He is also a terrific director so it would make sense for Disney to put Smith at the helm of a Marvel movie and/or a Star Wars film. There is a rumor that the match made in nerd heaven just might happen.

A report from Fandom Wire says that the Clerks director “met with Disney for a potential project” and “the nature of this project is secret.” Disney owns the rights to the Marvel Cinematic Universe and Star Wars. Since Smith is so well-versed in both entertainment properties, he could easily slide in as a director for an upcoming movie from either franchise.

In Clerks, there’s a debate of the best Star Wars movie as well as an in-depth conversation about the contractors working on the Death Star with the song “Chewbacca” by Supernova playing. Star Wars legends Mark Hamill and Carrie Fisher both appeared in Jay and Silent Bob Strike Back, which had a number of nods to the Star Wars movies. Smith directed CW’s The Flash and hosts the podcasts Fat Man on Batman and Hollywood Babble-On that are dedicated to discussing anything and everything related to comic books.

In other Kevin Smith news, his TV show Comic Book Men was canceled by AMC. The show was set out of his comic book store Jay and Silent Bob’s Secret Stash in Red Bank, New Jersey. The show about the lovable geeks collecting comic books started in 2012 and ran for seven seasons and 96 episodes.

After 96 episodes, the @ComicBookMenAMC are now the Cancelled Book Men. On a new #SModcast, hear Walt, Bry, Ming, Mike & I hold a Viking funeral for our @AMC_TV show and reminisce about the happy highlights of seven seasons! With big @TellEmSteveDave news: https://t.co/C5HSs6H2F1 https://t.co/Ij6Rf9Suh8

I’m sure Kevin will be a-okay with Comic Book Men getting canceled if he gets to direct a Star Wars or MCU flick. Check out the 25-year-old letter that changed Kevin Smith’s life.