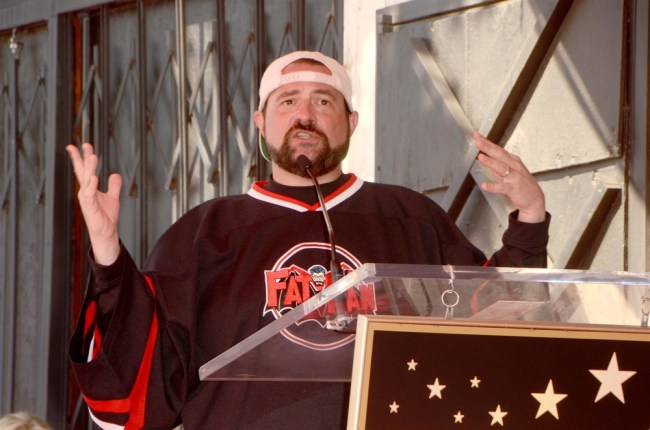 Kevin Smith is lucky to be alive. Last month, the 47-year-old filmmaker suffered a “widow-maker” heart attack due to a 100 percent blockage of his left anterior descendiny artery. He canceled his show to go to the hospital, a move that he claims saved his life.

The Clerks director has eaten poorly since he was a kid, scarfing down back-to-back fried chicken dinners in the nights leading up to his heart attack.

Smith, who famously lost 85 pounds eight years ago after Southwest Airlines kicked him off the flight for being too fat, recently returned to his podcast “Hollywood Babble-On” and spoke about his new plant-based diet.

Smith claimed a friend recommended a diet from magician Penn Jillette that he wrote about in his book “Presto!: How I Made Over 100 Pounds Disappear and Other Magical Tales.” Since adopting the diet less than two weeks ago, Smith has dropped 20 pounds.

I’m officially down 20 pounds as of this morning! 20 pounds in 13 days & my blood pressure is amazing. How did this happen? @pennjillette & his book “Presto” turned me on to @RayCronise and his program at https://t.co/ktvv6VBbub My Doc said lose 50 pounds. 20 down, 30 more to go! https://t.co/n0iuJNdLWp

“It’s a pretty intense program, but it’s been interesting. And of course necessary for my health and stuff. But once I get to a decent place, then I can think about eating again,” Smith said.

“This doesn’t come from a personal philosophy, this comes from an ‘I have to.’ I don’t know if I call myself a vegan, maybe a non-animal eater. The program is so far manageable,” he added.

Smith’s doctor ordered him to lose 30 more pounds and continue to not eat like a high school stoner. Thankfully, Smith is dedicated to the lifestyle change.