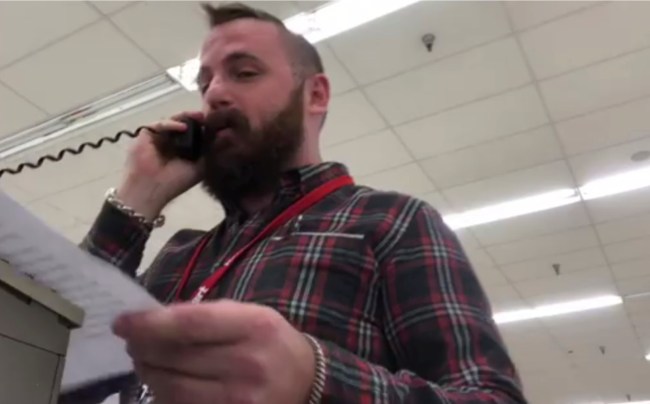 I’m 34 years old now, but when I was 16, I was some punk kid who split time between working at a golf course during the summer and a Panera Bread during the winter. In those 18 years since, I’ve had full-time jobs, other part-timers, been unemployed and have hustled to make ends meat at times. It’s been a wild journey, guys.

However, during that same timeframe, a guy by the name of Joshua Englert was working at a Kmart — the entire time — starting at age 16 and, now 34, worked his way up to being the store manager at a location in McMurray, Pennsylvania. It’s pretty awesome to see the guy be at one job for over half of his life, especially one that he found rewarding to go to each day.

Well, unfortunately, Kmart is victim of its parent company, Sears Holdings, filing for Chapter 11 bankruptcy earlier this week, meaning the retail giant is closing its doors for good. While current, teenage punk kids like myself way back when are losing their hourly wage, guys like Joshua Englert are losing a major part of their life. It’s something that he poured himself into for nearly two decades, and he wanted to share his feelings.

That’s why Englert took to the store’s PA system and delivered an honest and emotional goodbye, which has since gone viral. It’s pretty awesome to see.

A Pennsylvania man and general manager of a Kmart made an emotional announcement at the final closing of the retail store. pic.twitter.com/ktPRCB3bIM

As you might imagine, the video’s getting a lot of attention on social media, with millions of people saluting Josh Englert, respecting his positive influence and uplifting message.

All those stores closing that we all love to analyze employee real people whose lives are drastically changing. Never forget that. #retail https://t.co/tB18y4Hb0s

Have pride in your work wherever you work. There is no price on the benefits he's rec'd. Kmart employee chokes up as he makes his final announcement before the store closes permanentlyhttps://t.co/Wf97RTEAAh

I hope this man received sincere job offers. Eighteen years dedicated to one employer is to be commended.https://t.co/L1QBryH5qY

It’s moments like this when big businesses see the impact of their corporate decisions. When the big wigs who pull in big bucks with six-figure salaries understand that, while they may sit at a desk all day long, people like Josh are out there devoted to the brand and living it every single day.

Here’s to Josh finding something good in his next career.