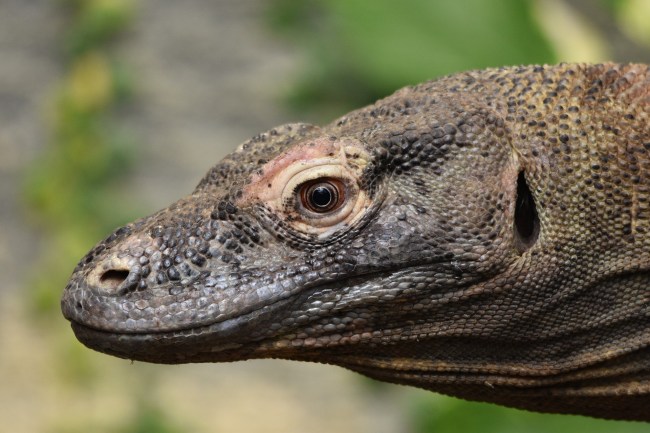 I was today years old when I learned there’s a controversial resort named ‘Jurassic Park’ that’s being built on Rinca Island off of Indonesia, home to thousands of Komodo Drags, the largest lizards in the world.

The Komodo Dragon (aka Komodo Monitor) can grow up to 10-feet in length and weigh up to 150 pounds. Older studies found that the saliva in Komodo Dragons had enough septic bacteria to bring down prey but recent studies suggest otherwise. I grew up always thinking they had borderline venom in their mouths and it’s hard for me to think otherwise. They are apex predators who dominate every species on the Indonesian islands of Rinca, Komodo, Flores, and Gili Motang.

According to a report in the Daily Mail there’s a multi-million-dollar ‘Jurassic Park’ luxury resort that’s being built on the island of Rinca and it’s being marketed as the real-life version of Steven Spielberg’s dinosaur park from the movies. Guests will be able to get up close and personal with Komodo Dragons but conservationists are very much against the building of the resort.

One of the workers building the resort was attacked by one of the lizards and the injuries sound straight-up gruesome:

The 46-year-old worker, named as Elias Agas, was working at the ‘Jurassic Park’ resort that’s currently under construction on Rinca Island.
According to reports, the reptile “tore several parts of his body” before the man was rushed off the island by speedboat to a nearby hospital.
The resort has sparked controversy, given it’s home to around 1000 of the remaining 3000 Komodo Dragons around the world.
The beasts, the largest reptiles in the world, can grow to 3 metres in length and weigh up to 90kg. The bite of a Komodo Dargon can be fatal if not treated quickly.
According to witnesses of the attack, the lizard had gotten only a few feet away from them before it struck. (via News AU)

The dude had parts of his body ripped off by a Komodo Dragon. I’m not sure I can envision many scarier moments than that. And this came on the heels of an apparently ‘leaked picture’ showing one of the lizards squaring off with a truck which conservationists were furious about:

A widely-shared photo earlier this month showed a Komodo dragon facing off with a truck in a muddy clearing of the jungle.
Conservationists said it showed the reptiles had already been disturbed by the destruction and noise of the huge vehicles.
Gregorius Afioma, an local activist commented on the image: ‘This is probably the first truck to enter the Komodo dragon conservation area since the Komodo dragon came to the world’s attention in 1912.’
‘The idea to build a Jurassic Park is honestly embarrassing,’ he added.
‘People come here to see Komodos in their natural habitat … these people are selling a concept where (visitors) can walk around indoors to see Komodo dragons, which to me is no different than a zoo.’
Following the leak of the picture of the Komodo dragon facing off with the construction workers’ truck, the government denied it was linked to the tourist development. (via DailyMail)

Here’s that viral photo of the Komodo Dragon squaring off against a truck. I’ll let you be the judge of whether or not this was the result of development and if that’s a construction truck or not…

Development dispute on Komodo Island: this image of Komodo dragon vs truck is all over social media & is a good illustration of why residents and activists have been fighting plans for a restaurant & tourist accommodations, as we covered here in 2018: https://t.co/8zPYbDpJB6 pic.twitter.com/8qIaEKCaLa

If you’re wondering what a Komodo Dragon attack really looks like you can hit play on this YouTube video but you should 100% know it’s gruesome and there’s blood involved. Don’t watch this video unless you’re fully prepared to see a deer get eaten by a lizard.

It’s predicted that Komodo Dragons could go extinct halfway through this century if their habitat isn’t fiercely protected. But expanding tourism in a careful manner brings in lots of money that can be pumped back into conservation. So they’re walking a tight rope here. Anyway, I hope that guy who had parts of his body ripped off by a Komodo Dragon is doing okay right about now. Meanwhile, I’m over here learning that you can buy a full-sized lifelike Komodo Dragon stuffed animal for just $50. What’s stopping me from buying that right now, anything?