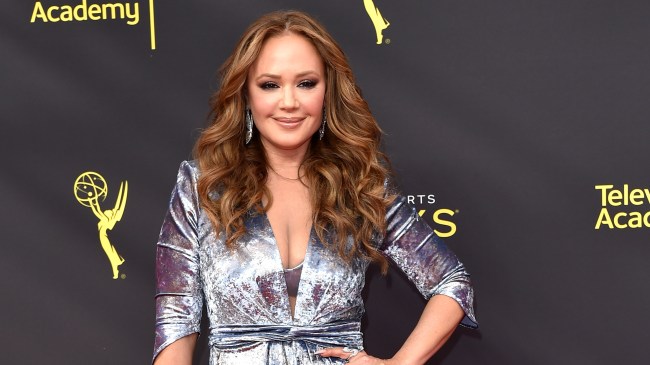 Actress and activist Leah Remini, who has been on a crusade against an organization she was once a proud member of, Scientology, says the multiple rape charges against actor Danny Masterson are “just the beginning.”

Masterson, best known for his work on That 70s Show and The Ranch, faces up to 45 years in prison if convicted on all three counts of rape.

The charges come as a result of an almost three year investigation of Masterson and follow a lawsuit that was filed against him by four women in 2019 who all claimed that they were being stalked and harassed by the Church of Scientology after accusing Masterson of rape.

The lawsuit, which also named Scientology leader David Miscavige as a plaintiff, alleged that in an effort to try and silence her, representatives of the Church of Scientology killed one of the women’s dog, ran her off the road, and threatened to release nude photos of her when she was underage.

The Church of Scientology and Masterson denied the claims, just as Masterson has done with these new charges.

Remini, who hosted a show for three seasons on A&E called Scientology and the Aftermath that tried to expose the organization and its controversial practices, says the rape charges against Masterson are just the tip of the iceberg.

“Finally, victims are being heard when it comes to Scientology! Praise the lord! This is just the beginning Scientology, your days of getting away with it is coming to an end! #justice #scientologytheaftermath,” Remini wrote on Twitter following the news.

Finally, victims are being heard when it comes to Scientology! Praise the lord! This is just the beginning Scientology, your days of getting away with it is coming to an end! #justice #scientologytheaftermath https://t.co/oAFlIoWFYd

She also posted a link to a story by noted investigative journalist and author of The Unbreakable Miss Lovely: How the Church of Scientology Tried to Destroy Paulette Cooper, Tony Ortega.

The link leads to a story published on Thursday entitled, “How will Scientology react to Danny Masterson being charged with rape?”

“It’s not just that Danny Masterson is a lifelong Scientologist and was a reliable soldier among Scientology’s celebrities,” Ortega wrote. “The three women whose allegations have led to these charges were all Scientologists themselves (though no longer), and there’s solid evidence that the Church of Scientology knew about their allegations and actively tried to discourage the women from going to the police.”

“I think they will be very careful about what they say,” Mike Rinder, former Executive Director of the Office of Special Affairs for Scientology, told Ortega. “Along the lines of ‘The truth will come out once all the evidence is heard, we have faith in the American Justice System’ — even though Hubbard says it’s full of criminals and worthless. They have to be careful. If they throw him under the bus and alienate him he could cause a lot of trouble for them. They might want to keep him close so they can keep all their stories straight. There are many, many people who have their fingerprints all over this, as the first place the rapes were reported was to Scientology and they did everything possible to ensure it did not get reported to the authorities. I think they will try to be neutral publicly, but be circling the wagons with him behind closed doors. They know what a massive can of worms this can open.”

“Since we were victimized and raped by Danny Masterson—and knowing we are not the only victims — all we have wanted was justice, accountability, and truth,” reads the statement. “Instead, we were subjected to continued harassment, embarrassment, and re-victimization by Masterson and the Church of Scientology, which has only worsened since they learned we were cooperating with authorities. We are thankful that the Los Angeles County District Attorney’s office is finally seeking criminal justice against Masterson after a three-year investigation. We are confident that the truth will be known and hope that the charges filed today are the first steps in this long journey of healing, justice, and holding those that victimized us accountable.”

The 44-year-old Masterson is currently out on bail after posting a $3.3 million bond.