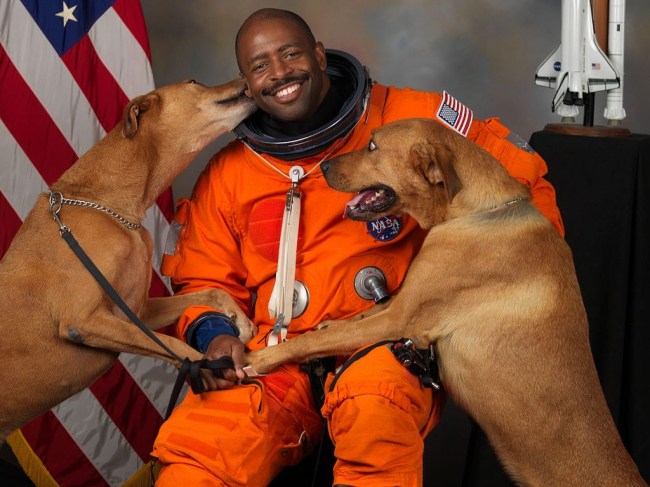 Leland D. Melvin is a bit of a legend on the Internet for his official NASA photograph where he brought in his two dogs to pose with him. That picture seems to go viral every couple of months on Reddit and brings him fame but Leland’s epic life story is a thousand times cooler than some viral photograph.

Leland has spent nearly 24 days in space which is a long way from his birth home in Lynchburg, Virginia where he was a star athlete and H.S. scholar. Leland Melvin then went on to become a star football player at the University of Richmond and was drafted in the 11th round of the 1986 NFL Draft by the Detroit Lions. He got injured in training camp and went to the Cowboys where he injured himself again. And that’s where Leland’s life really began to take off after he put sports behind him and joined NASA. The AARP sat down with Leland to film this video cataloging his epic life:

One of the most pivotal moments of Leland D. Melvin’s life came when he was thinking about applying to become an astronaut and he was walking down the hallway at NASA HQ in D.C. when Charles Bolden, the commander who launched the Hubble Space Telescope, stopped him and said ‘you can’t get in if you don’t apply’.

It’s the simplest advice but it’s something most people fail to grasp. Nobody is going to walk up to you out of nowhere and off your dream job or a raise. If they do then you’re the luckiest man alive. In life, you have to set goals if you want to achieve them. You have to fight for you more. And that’s exactly what Leland’s been doing for his entire life. Pretty damn inspiring. And go Spiders.