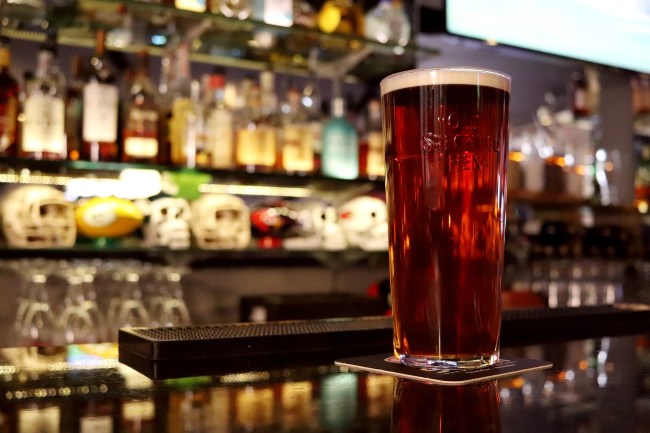 Pubs in England have remained closed throughout the past few months and they are expected to stay closed until Boris Johnson gives the green light for them to reopen on July 4th with new health precautions in place.

Those restrictions didn’t stop 100 drinkers from barricading themselves inside a pub in Liverpool and throwing a rager which culminated in a heated confrontation with the police where the drunks threw beers at the cops as they tried to shut the party down. Eight were arrested, 1 woman and 7 men, aged between 21 and 33 on charges of drugs and violent offenses.

I’m trying to imagine what it was like for the police when they received the phone call that up to 100 people were barricaded inside of a pub, playing loud music, and raging early into the morning and when they showed up the drunks threw beer bottles at the cops though none were injured. It sounds like something I’d expect to see in a Comedy, not in real life.

Merseyside Police officers were pelted with beer and other items as revellers took up their fortified position at the Britannia Hotel pub in Liverpool, the force said.
There were reportedly more than 100 people gathered at the Vauxhall pub at around midnight on Sunday, playing loud music and disturbing residents nearby, although only “a number of people” were said to take part in the blockade.
Seven men and one woman, aged between 21 and 33, were arrested for violent disorder and drugs offences. No officers were injured. The premises surrendered its licence on Monday.

“This is appalling behaviour and saddens me to see officers being put at risk from those flouting government guidelines,” said Detective Inspector Phil Atkinson. “Restrictions have been eased but by no means is this pandemic over and nor should we treat it like it is.
“Regardless of the current climate, throwing things at officers will never be accepted. Eight people were arrested and prosecution is likely. (via Independent)

The timing makes sense with the Liverpool-Everton Merseyside Derby having taken place on Sunday and drinkers probably still revved up from having soccer back but t1hat’s absolutely no excuse for any of this.

If they could’ve just waited a few more weeks they could’ve drunk at that pub legally and nobody would have gone to jail. But as it stands, the seven people who were arrested for drugs and/or throwing beer at the cops could have the book thrown at them. That’s not an ideal position to find yourself in during the ongoing global health crisis, is it?

Another thing that’s surprising me is I can’t recall an instance yet in my home state where police enforced lockdown measures. I know each state is different and each county has different rules than its neighbor but I can’t imagine the cops actually showing up to break up a gathering in America that isn’t some sort of protest.