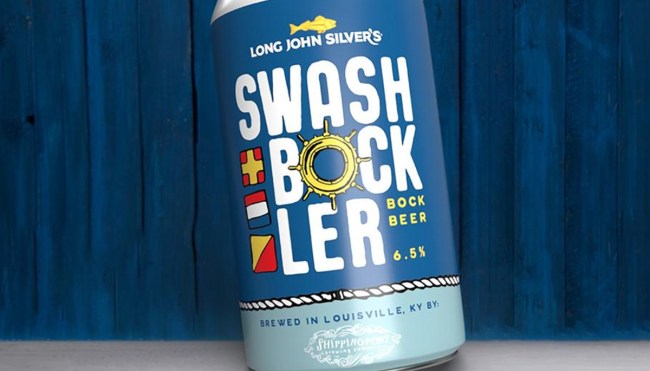 You don’t have to have an MBA to know the importance of diversifying your portfolio, and in recent years, a number of brands that are primarily known for their culinary offerings have opted to do exactly that by giving booze a try.

That includes a number of major players in the fast food space, as Taco Bell treated the world to an unexpectedly classy offering by releasing a wine designed to pair with a chalupa and Arby’s raised plenty of eyebrows when it released a french fry-inspired vodka last year.

Now, Long John Silver’s has decided to get in on the action and join the likes of Waffle House, IHOP, and the other chains that have harnessed some of their signature ingredients to whip up their very own beer.

According to Louisville Business First, the brand that defied the odds by successfully convincing the world to eat fast food seafood has teamed up with Shippingport Brewing Co. for a collaboration dubbed “Swashbockler,” which is (as you can probably guess by the name) a bock that clocks in a 6.5% ABV.

It’s not a coincidence that the collab dropped during Lent, as the decision to make a bock is a nod to the Bavarian monks who consumed that style of beer for sustenance while fasting in the leadup to Easter. It should also come as no surprise the beer pairs well with fish, as it not only features a touch of lemon but a bit of added zing courtesy of the restaurant’s malt vinegar.

It’s not crazy if it works.