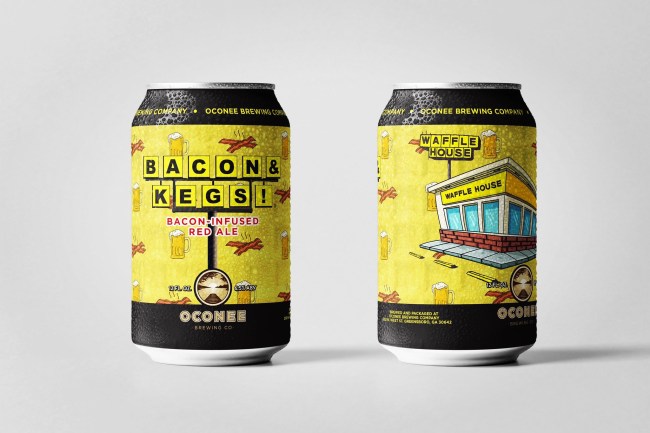 These craft beer collabs keep getting crazier and crazier. Martin House Brewing in Texas recently released a Wangz beer that tastes like buffalo chicken wings. It follows on the heels of their Dunkaroos beer. Miller High Life teamed up with Philadelphia’s Evil Genius to make a Mimosa Beer. Artisanal Brew Works collaborated with Warheads to produce a sour beer that sells out like crazy.

Eventually, every food brand will jump in the beer space since it’s an excellent way to advertise the brand without the cost of traditional advertising. These collabs are worth their weight in gold for the buzz created by earned media – It’s a stunt, sure, but it’s also a stunt that creates a product with an enjoyable consumer need that you can put in someone’s hand.

The latest beer / food collab to capture our attention: Waffle House beer. The Atlanta-based restaurant chain is collaborating with Oconee Brewing Company on a bacon-infused beer that smells like breakfast meats.

You know the smell – That smell that wafts through the air the second you enter a Waffle House at any give time of day.

The brewery claims “Bacon & Kegs pairs well with breakfast food items (obviously!) or can be enjoyed as a stand-alone, soon to be iconic beer.”

Waffle House always nails collabs like this. Last summer, I headed to Bonnaroo and posted up in a highway hotel hotel right next to a Waffle House. Naturally, my girlfriend and I hit it up at about 2AM every night before going to bed. The special edition Bonnaroo x Waffle House shirts that the employees were wearing for the weekend was the best merch we saw; hands down better than the official festival merch. Wish it was for sale!

Bacon beer isn’t really anything new to the craft beer scene, but I’m excited to crush a couple of these in the spirit of an iconic chain restaurant that never disappoints.

If you’re in Georgia, look for the release at Oconee Brewing Company on December 18th. Comes in six packs or growlers.