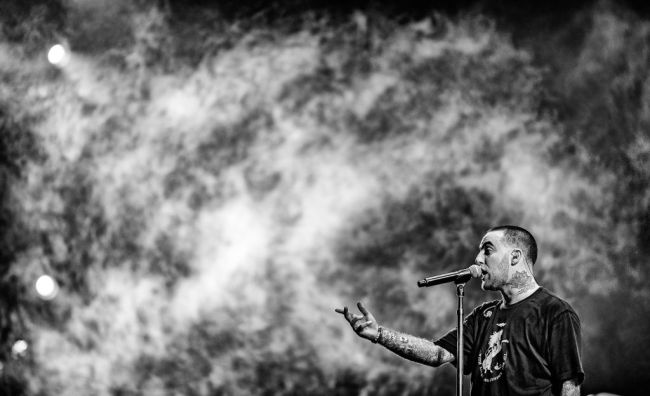 More than two years and five months after his untimely death, Mac Miller earned his first platinum album with Swimming. On Wednesday, February 24, Swimming was certified platinum by the Recording Industry Association of America (RIAA).

Behind the scenes at Mac Miller's 2018 Tiny Desk Concert pic.twitter.com/mJ6HyG67kE

Swimming earned a 2019 Grammy nomination. Mac Miller’s other albums Blue Slide Park, Watching Movies with the Sound Off, GO:OD AM, and the posthumous Circles received gold level certification from the RIAA.

The beloved Pittsburgh rapper’s Self Care was awarded double platinum status earlier this month by the RIAA after selling a total of two million units in the United States. The track reached certified platinum in May of 2019.

Mac Miller’s "Self Care" has now sold over 2 million units in the US.

Mac’s Faces mixtape is finally coming to streaming services in the near future, according to report this week from HypeBeast.

“The news was confirmed by the late artist’s friend and longtime collaborator ID Labs on Reddit. He responded to a user who commented on the lengthy process of clearing the samples on Faces, saying that the comment was ‘correct and currently happening.’”

On September 7, 2018, Malcolm McCormick was found unconscious at his home in Los Angeles. He was pronounced dead at the scene from an apparent drug overdose at 26-years-old.