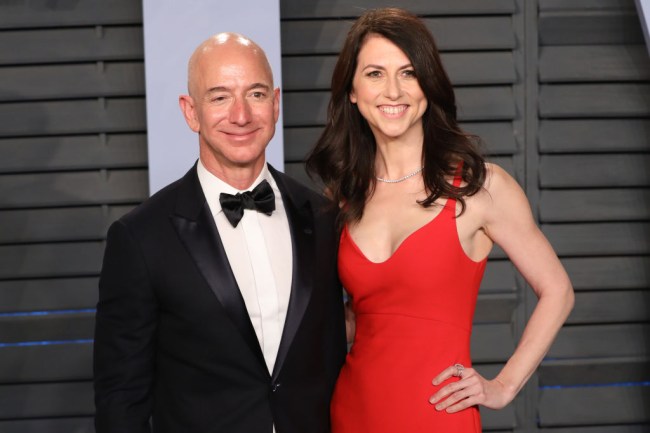 MacKenzie Bezos unloaded a ton of Amazon shares last month, in what would be a massive amount of money for anyone, but it really was just chump change for the ex-wife of the second-richest person on the planet.

A Securities and Exchange Commission (SEC) filing dated December 31, 2019, revealed that MacKenzie Tuttle sold approximately 200,000 shares of Amazon, which at the time were worth 1,847.84 each. The sold shares pocketed over $369 million.

While that is a substantial amount of money that we would all love to have, that is pocket money for the ex-Mrs. Amazon. MacKenzie Bezos has an estimated net worth of 36.2 billion.

And those 200,000 shares of Amazon that she sold is a drop in the sold gold and platinum bucket. Last April, MacKenzie Tuttle was awarded 19.7 million shares of Amazon, about a 4% stake in the e-commerce giant, as part of her divorce settlement with ex-husband Jeff Bezos. So she still owns 19.5 million shares, and with Amazon’s current stock price of $1,850.92, her Amazon shares alone are worth $36,092,940,000. Don’t cry for Jeff Bezos, he is sitting pretty with a net worth of $114.8 billion according to Forbes.

It must be difficult for MacKenzie Bezos to look at her financial portfolio each and every day, to see that all of the wealth is derived from Amazon, which is directly tied to Jeff Bezos. The same Jeff Bezos who cheated on her, the mother of his four children, with Lauren Sanchez. The same Lauren Sanchez who allegedly leaked news of her extramarital affair with the Amazon founder to her brother who then reportedly sold the scandalous story including sexual text messages and nude photos to the National Enquirer.

Then again, it can’t be too difficult to look at your financial records and see that you instantly became one of the richest people on the planet because of Amazon and because your husband cheated on you.

MacKenzie could have taken the $369 million to give to charity. After her divorce, the 49-year-old Tuttle signed the Giving Pledge, which she promises to donate half of her fortune to charities and philanthropic causes during her life or in her will. The Giving Pledge was started by Warren Buffett and Bill and Melinda Gates in 2010. Tuttle has been involved with charities and causes such as Bystander Revolution, Bezos Family Foundation, the Day One Fund, and TheDream.US.