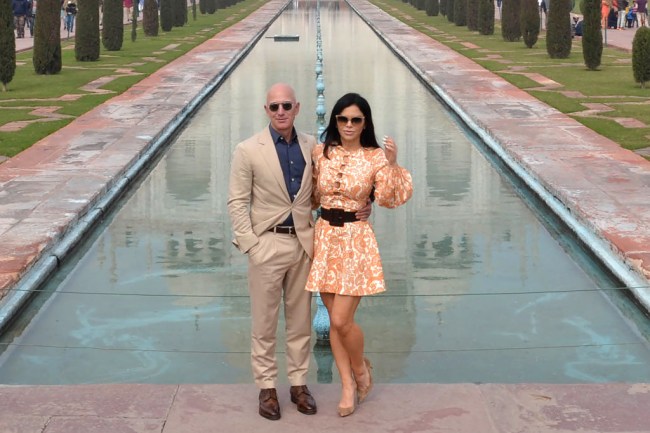 U.S. federal prosecutors have obtained evidence that fingers Lauren Sanchez as the person who sent raunchy text messages that she received from Jeff Bezos to her brother, who leaked them to the National Enquirer. The Wall Street Journal claim that federal sources informed them that it was the Amazon head’s girlfriend who shared the racy sexts and sexual photos of Bezos.

A year ago, the secret affair between Jeff Bezos and Lauren Sanchez was exposed when the National Enquirer published sexts and intimate nude photos that the Amazon CEO sent to the married actress.

“I love you, alive girl. I will show you with my body, and my lips and my eyes, very soon,” one text message from Bezos to Sanchez read. Another message said, “I want to smell you, I want to breathe you in. I want to hold you tight.… I want to kiss your lips…. I love you. I am in love with you.”

At first, the rumors were that Sanchez shared the text messages with her girlfriends, and that one of them leaked the photos in a get-rich-quick scheme.

Bezos’ security chief Gavin de Becker began an investigation into how the private messages were released to the public. Becker said Sanchez may have shared the photos purposely, possibly with her brother Michael Sanchez. Sanchez shared the photos and texts because they “were able to trace the material in the cloud, where most computer and phone messages and images are stored.”

Michael Sanchez denied that he had anything to do with the leaked messages. However, federal prosecutors in Manhattan say they have evidence that it was Lauren’s brother who leaked the photos to the National Enquirer.

Bezos claims that his phone was hacked in the January 2019 incident. Coincidentally, Bezos also believes his cell phone was hacked in an attack this week by Saudi Arabia crown prince Mohammed bin Salman. The prince sent him a video on WhatsApp, which was actually a malicious file that infiltrated Jeff’s phone.

Jeff Bezos has a net worth of $115.6 billion, which a recent slip in the price of Amazon shares made the e-commerce magnate the second-richest person on the planet after Bernard Arnault, the chief executive of luxury goods behemoth LVMH, who has a net worth of $1.9 million, according to Forbes.

Just a conspiracy theory, but maybe Bezos kept giving Sanchez the “you’re the only woman for me, but I can’t leave my wife right now because it’s bad for Amazon stock” BS. After a few months of living in the shadows, she pulled the ultimate side chick move and let the entire world know about her secret relationship with the second-richest man in the world. She informed everyone, including Jeff’s wife, MacKenzie Tuttle, but without being a snitch, which he may have gotten mad about and dumped her.

Everyone knew that Bezos cheated on MacKenzie for months, and that gave her no choice but to divorce him. MacKenzie, who married Bezos in 1993 and gave birth to their four children, was reported to receive $35.6 billion in the divorce.

Sanchez breaks up Jeff’s marriage, blames the leaked messages on “hackers,” he’s in love with her, so he stays with Lauren despite the betrayal. Meanwhile, she gives the damning text messages to her brother so that he could make some money off Operation Get The Second-Richest Man In The World. Michael Sanchez allegedly sold Jeff’s racy sexts and photos to the National Enquirer for $200,000, which is way too low, and he should have gotten way more money from Jeff Bezos nudes.

MacKenzie automatically becomes one of the wealthiest people in the world. Jeff loses some money but will never struggle financially, plus he gets to be with his Latina mistress without hiding it. Lauren Sanchez is now dating the second-wealthiest person on the planet and puts herself in a position to marry the second-richest person on the earth. Everyone is happy. Who knows, maybe Sanchez could get a divorce from Bezos in a few years and get that MacKenzie Tuttle money. Lauren Sanchez played this flawlessly.