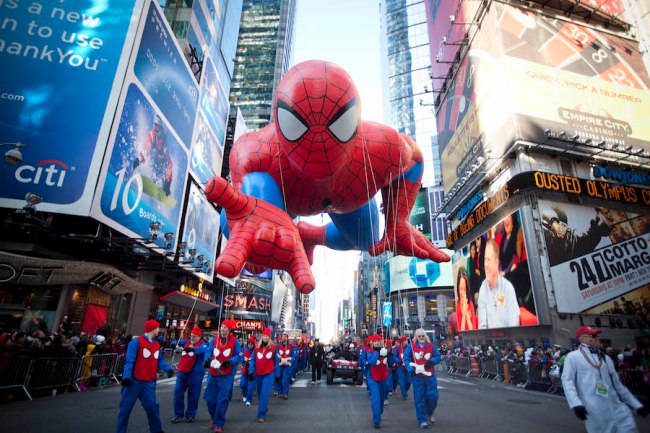 The Macy’s Thanksgiving Day Parade is a tradition that’s been a huge part of my life.

As a kid, the parade was the only bright spot of the holiday.

All of my favorite fictional characters appeared on TV, one after another, either in human, masked, or balloon form.

The parade is a three-hour commercial marching down the streets of New York City. I’d watch from beginning until Santa’s fat ass showed up to mark the end of the procession and the unofficial start of the Christmas season.

Thanksgiving is now my favorite holiday and I still watch the parade with my kids though they only drop in and out of the broadcast.

The 2020 Macy’s Thanksgiving Day Parade is going to look much different because of Covid-19. New York City Mayor Bill de Blasio announced the changes during a press conference yesterday. In a press release published on the same day, Macy’s shared more details about the changes.

Business Insider breaks down the biggest changes to the annual tradition including:

And finally, there will be no actual parade.

Yes, the Macy’s Thanksgiving Day Parade isn’t a parade this year. Instead of the usual 2.5-mile walk through New York, the entire event will be held in front of Macy’s in Herald Square.

Here’s what I’m proposing, which absolutely won’t happen because companies spend millions of dollars to appear at the event, but I’m going to lay it out on the table anyway.

How about a “Best of” the Macy’s Thanksgiving Day Parade show?

I’ve watched the Macy’s Thanksgiving Day Parade every year for the last 30+ years and I remember close to nothing about all those hours of TV. Why not show new fans some of the old, classic, and frankly pretty cringy moments from the parade?

Take this Marvel float from 1987 as an example. Imagine kids in 2020 who’ve seen the Marvel Cinematic Universe unfold on the big screen watching Captain America save Wolverine from Dr. Doom, set to the “Back To The Future” theme.

Why watch SpongeBob and Ronald McDonald balloons get dragged around by trucks when we can all relive Barney the big purple dinosaur getting murdered on live TV?

This holiday season, few people want to be reminded that half the world is still shut down so just edit together the most epically hilarious Macy’s Thanksgiving Day Parade broadcast moments ever and take us all back to a time when life sucked a little less.

And maybe drop in like one John Legend performance.