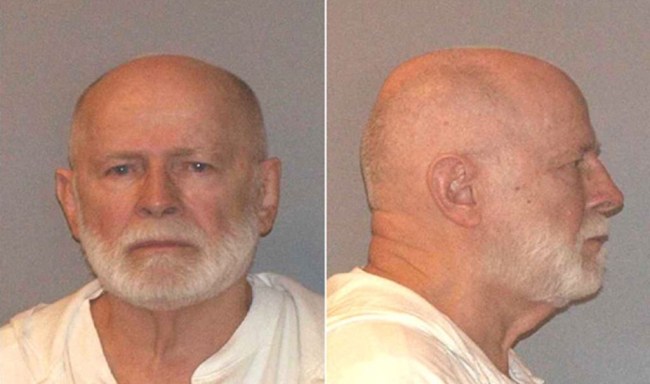 On Tuesday morning, Boston mobster turned FBI informant James “Whitey” Bulger was found unresponsive at 8:20 a.m. on his first day after being transferred to Oklahoma City to the Hazelton Penitentiary.

The 89-year-old, who was in a wheelchair, was reportedly approached by 3 other inmates who wheeled him into a corner that could not be captured by surveillance cameras. As TMZ reports, one used a lock in a sock as a weapon until he was unconscious while another attempted to gauge his eyes out with a shiv. They also attempted to cut out his tongue. Bulger reportedly fell to the ground covered in bruises and with several dents in his head, “barely recognizable.”

Sources with The Boston Globe claim one of the lead suspects as 51-year-old ex-Mafia hitman Fotios “Freddy” Geas. Geas is serving a life sentence for the 2003 murders of one-time mob boss Adolfo “Big Al” Bruno and low-level associate Gary Westerman. He carried these murders out with his brother, Ty.

“Nobody screwed with them,” McDonough told the Boston Globe. “Freddy, especially.”

Freddy Geas’ disdain for rats is personal. He was groomed by Anthony Arillotta, an Italian associate of the Genovese crime family, who gave Freddy and his brother “official approval” even though they were Greek and could never officially be made members of the Italian mob. In return, Freddy and Ty carried out several murders for Arillotta, including the murder of Bruno and Westerman.

Here is a photo of brothers Freddy and Ty:

Arillotta eventually turned on the Geas brothers and became the lead witness for the prosecution. According to Rolling Stone, Freddy Geas’ good friend, Frankie Roche, also turned on him after Roche hired him to carry out the hit on Bruno.

If you guys aren’t convinced the mob is a ruthless group, consider this: Geas was also charged with being the getaway driver in a botched murder of Bronx union boss Frank Dabado, who Genovese crime boss Artie Nigro tried to kill after the two got in a fight over a pair of TONY BENNETT CONCERT TICKETS.

In any event, Freddy Geas has now reached legend status after carrying out a prison murder on one of the most notorious mobsters in history.