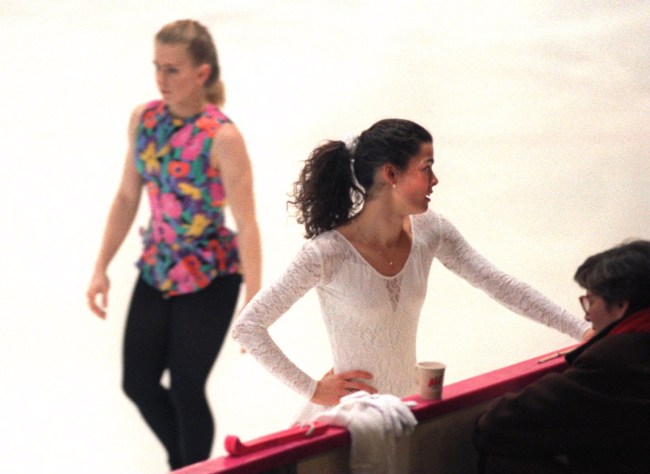 I can’t remember what I did this weekend, but there were a few cultural events when I was just a little tyke that I can remember distinctly. The O.J. Simpson trial. Bill Clinton’s beamer. Princess Diana’s passing. And the Nancy Kerrigan hit.

There wasn’t a household in America who wasn’t glued to their television screens to watch the real-life Lifetime movie that was the Harding/Kerrigan saga. In January 1994, Harding’s ex-husband, Jeff Gillooly, and her bodyguard, Shawn Eckhardt, hired a hitman to break Kerrigan’s right leg so that she would be unable to compete at the U.S. Nationals.

Hitman Shane Stant took a 21-inch collapsable baton to the area above Kerrigan’s right knee, causing her to withdraw from the U.S. National Championship (which Harding won) and producing one of the most recognizable soundbites in sports history–insert Kerrigan’s “Why?!” screams here. Kerrigan was able to recover in time for the Olympic games, in which she secured a silver medal. Harding finished 8th.

Twenty four years after the attack, the 46-year-old Stant has spoken to Inside Edition about the attack that sent him to prison for 18 months.

“The ultimate goal was so that she wouldn’t skate at the Nationals,” said Stant.

“Nobody could have foreseen how huge it would’ve become, no one,” Stant said in his interview with Inside Edition, which will air in full on Thursday.

“There was initial talk of cutting her Achilles tendon, which obviously would cripple her,” he said. “I didn’t think it was necessary. I wasn’t willing to do that on top of that.”

To this day, Harding claims she played no role in the incident.

“I knew that something was up,” Harding, now 47, told ABC News earlier this month of Gillooly’s alleged plot. “I did, however, overhear them talking about stuff, where, ‘Well, maybe we should take somebody out so we can make sure she gets on the team.’ I go, ‘What the hell are you talking about?’”

The full Inside Edition episode will air tonight.