Man Films Himself Being Swallowed By Massive Avalanche In Terrifying Video 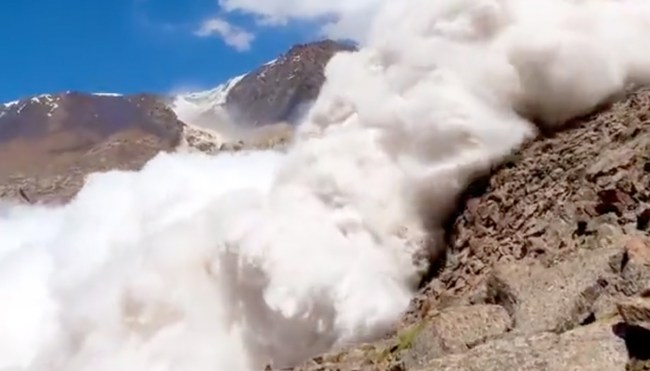 The internet is filled with reminders of the wide variety of ways nature can turn an otherwise enjoyable day in the great outdoors into a living nightmare at a moment’s notice.

In some cases, you can take a number of precautions to avoid the kind of fate a tourist at Yellowstone National Park befell when they were gored after deciding to get way too close to a bison. However, there are a number of other situations you can only do so much to avoid—like getting caught in an avalanche.

It doesn’t take much to trigger what is essentially a snow tsunami, and we’ve been treated to some incredibly harrowing clips of snowboarders who’ve filmed themselves outracing one and an ice climber who was forced to hang on for dear life after getting caught in one without any safety equipment 400 feet above the nearest surface.

Now, you can watch one of the wildest clips I’ve ever encountered courtesy of Harry Shimmin, who was recently taking a tour of the Tian Shan mountains in Kyrgyzstan when he heard one of the last things you want to hear when you’re in that kind of location: “the sound of deep ice cracking behind me.”

Shimmin recounted what went down on Instagram after uploading a video he filmed after realizing the avalanche was heading his way. He remained remarkably calm before taking cover behind a rock he’d realized was the only feasible option when it came to seeking shelter, as the camera held steady in the 45 seconds it took for the snow to race down the mountain and envelop him.

Shimmin said none of the 10 people in the vicinity were in serious danger (although one of them had to seek medical treatment for a cut on their knee), but noted that likely wouldn’t have been the case if they’d been just a little bit closer to the epicenter.