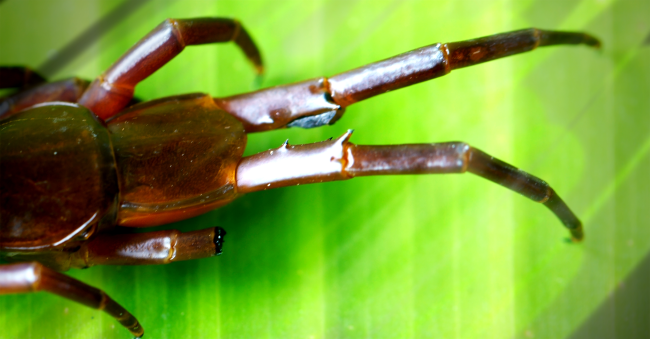 Nature is terrifying. Yesterday we had the image of a giant tortoise stalking and eating a seabird in horrifying, slow motion, in a never before seen encounter to erase from our brains.

Today we have a man who while living in Japan came across a giant centipede in his apartment that can categorically be described as 10,000 levels of NOPE.

And this isn’t even our first go-round with frighteningly large centipedes this week.

“Found this in my apartment while living in Japan. They are FAST!” wrote Redditor Saucy_Lemur.

Good lord… could you even fathom having one of these creatures chasing after you? I just got chills thinking about it. That might be the most disturbing looking living thing I have ever seen in my life.

Seeing that in person would have been a pure “kill it, kill it with fire” moment and I would have NOPED TF right out.

Of course, despite our terror at encountering such a bug, as we found out earlier this week, these giant centipedes aren’t really that bad for us.

“They are actually considered one of the good bugs to have in your home despite the creepy look of them,” commented Redditor DaxFlowLyfe.

“If you see them, you have something else infesting your home that’s worth eating, but you don’t notice them because the house centipede is actively taking control of that problem for you.

“Now, if you have a TON of house centipedes and they are often sighted.. You should actually be worrying less about them, and more about what horrible thing is in your house to attract so many…

This jibes with what researchers said about some frighteningly large, and carnivorous centipedes they have been studying on a remote Australian island in the South Pacific. They said those particular giant centipedes are “vital for the island’s ecosystem.”

Whatever. Just keep them away from me. Although, I do want to see one of these bad boys take on another massive bug like they do in the entertainment capital of the world, Japan. My money would be on the one with all the creepy AF legs.