Man Gets Out Of His Car And Randomly Sucker Punches Dancing 12-Year-Old Kid On The Street, Is Now Wanted By Police 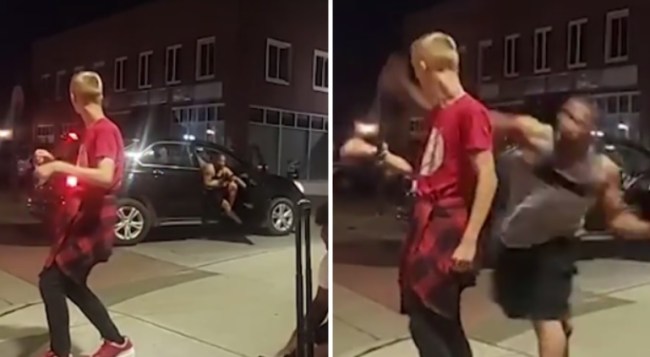 The Police are currently looking for a man who was filmed randomly punching a dancing 12-year-old boy on the street in Cape Girardeau, Missouri.

In the video, the boy was seen peacefully dancing and performing on the street when a man gets out of a dark-colored SUV and punches him in the back of the head. The man then got back into the car and fled the scene.

This heinous act went down Friday night in Cape Girardeau, MO, a little after 11:30 PM, when two young kids were performing on a street corner … busting some moves to music they had playing on a speaker, while filming themselves live from a nearby camera.

Soon enough, a man joins them and starts popping and locking too. His name is Micheal ‘Crank’ Curry, the one who posted the video. He tells TMZ these two kids are students of his — he runs a local dance studio — and they do this all the time without any issue.

The three of them were going back and forth for a while, until the taller of the two boys — who’s said to only be 12 years old — got up to dance, only to get viciously attacked.

In the middle of his performance, a black CRV-type car pulls up alongside them, and a man hops out the passenger side. The kid notices him, but doesn’t think anything of it as the guy dances along with them and inches even closer … masking his true intentions.

When he’s right next to the boy, he swings wildly and hits the side of his head, knocking him clean to the ground. Micheal screams out in shock and tries chasing him. The guy scurries back to the car and they take off … Micheal comes back to attend to the kid

The police currently have information on the identity of the man who punched the kid but are asking people to help locate him.

Police say he was able to tell officers at the hospital that he did not know the suspect and he along with his friends did not have any disputes that would have led to this incident.

Police still encourage the public to call them if they have any information on this incident.