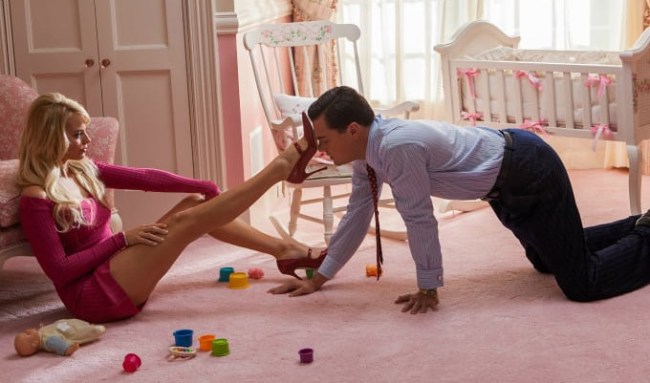 In a new interview with Porter magazine to discuss some of her upcoming projects including Quentin Tarantino’s Once Upon a Time in Hollywood, Margot Robbie revealed how she had to hide her embarrassment while filming the sex scenes in The Wolf of Wall Street.

Playing Naomi Lapaglia, Jordan Belfort’s wife, Robbie had two scenes that were arguably the most memorable in the entire film. Both of them looked very sexy, but it turns out that the reality of actually filming them was anything but.

One of those scenes took place in the baby’s nursery and involved Robbie trying to seduce slash frustrate her husband for some of his past indiscretions.

“It doesn’t come across when you’re watching the movie, but in reality we’re in a tiny bedroom with 30 crew crammed in,” Robbie explained to Porter.

When asked if the crew was mostly men, Robbie said it was “all men.”

“And for 17 hours I’m pretending to be touching myself. It’s just a very weird thing and you have to bury the embarrassment and absurdity, really deep, and fully commit,” Robbie explained.

First off, that scene took 17 HOURS to film? How many takes did they do? And second of all, I now have even more respect for her as an actress. That could not have been easy.

As you probably recall, the other iconic sex scene in the film involved Robbie lying on top of a pile of cash, which, in theory, sounds pretty awesome. In theory…

“I got a million paper cuts on my back from all that money! It’s not as glamorous as it sounds,” Robbie once told The Daily Beast. “If anyone is ever planning on having sex on top of a pile of cash: don’t. Or maybe real money is a bit softer, but the fake money is like paper, and when I got up off the bed, I turned around to get my robe and everyone gasped. I said, ‘What is it?’ And they said, ‘You look like you’ve been whipped a million times. Your back is covered in a thousand red scratches.'”