Marijuana Use While Drinking Makes It Easier To Get Alcohol Poisoning 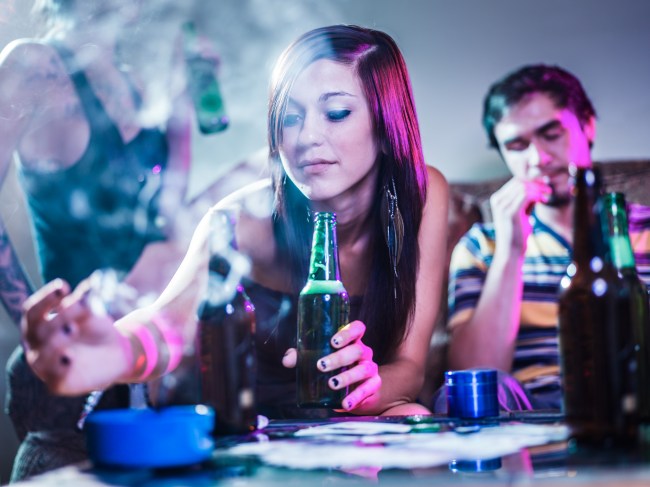 There always seems to be that one misfit in every crew. You know the one that is never content with just kicking back with a few beers and watching the game, and always wants to take the party to the next level. This is the dude that, no matter what, cannot make it to the second quarter without trying to con everyone into heading down to the local strip club to finish the game. “Come on, man, we’ll get them to put the TV on there,” he might say. Yep, he’s the guy that can’t even sit down while feeding the room some highly-energetic spiel about “Going hard or going home” because he’s too busy grabbing brews out of the kitchen at a rate somewhere between Jim Morison and John Belushi. And then he breaks out the weed. This is where things start to go awry with this animal because, well, the booze mixed with the pot seems to turn him into a wobbling, unstable monster who is destined to either end up in the fetal position or begging for someone to call 911 before the night is all said and done. That is if he doesn’t drop dead first.

That dude is in real trouble.

While marijuana is a safe drug on its own, it can bring about some disastrous results when mixed with alcohol, researchers say. A recent study published in the latest issue of Alcoholism: Clinical & Experimental Research finds that using marijuana in conjunction with booze exponentially increases a person’s chances of alcohol poisoning. When examining a group of more than 650 partiers, researchers found that those who consumed alcohol and marijuana in tandem were more likely to pass out, suffer a blackout or go down that dark rabbit hole where emergency assistance is required to keep them breathing. And this sort of thing is apparently happening a lot. Only 20 percent of the respondents said they used alcohol by itself. The rest were either drinking with a pot chaser or using any number of other drugs that also come with savage repercussions.

The most popular substance to get mixed with alcohol, however, is marijuana. But this is not a supernatural occurrence. Considering that pot is going legal in more parts of the world – 11 U.S. states have passed laws allowing it to be sold similar to beer — it has become part of normal society to use weed in some form or fashion. But health experts are concerned that as this trend continues to rise in popularity – as more legalization takes hold across the country — some people might be putting themselves at risk of some rather dire consequences. They want them to know that it is probably not a wise idea to mix substances that don’t really mesh well together.

“Marijuana seems to interact with alcohol in unique ways that are still not well understood,” lead study author Anne C. Fernandez, Ph.D., told Healthline. “For example, there is evidence that alcohol combined with marijuana increases THC absorption, so by drinking alcohol, you actually end up with more THC in your blood than you would if you used marijuana alone.”

It’s what makes marijuana good that also makes it bad.

For decades, cancer patients have been using cannabis as a way to control nausea that often comes from chemotherapy treatment. But it is pot’s power to keep the old stomach from turning inside out that makes it a bad idea for those who are doing some heavy drinking. “It is antiemetic, so it can prevent vomiting, thus keeping dangerous doses of alcohol in your body,” Fernandez explained.

There is no doubt that alcohol intensifies the effects of marijuana. Even when the risk of alcohol poisoning isn’t a concern, the buzz of these two substances combined can come on rather intensely. It has been my experience, however, that both can be enjoyed by simply exercising a little care. For starters, if you are going to use marijuana, start with that first and then moderate your alcohol consumption on top of it. This will provide you with some control over the wreckage. Still, it’s probably not a good idea to start throwing back shots. And if you’re consuming edibles, be sure to give them plenty of time (around an hour) to kick in before you start pouring booze down the gullet. You don’t want the alcohol and weed to sneak up on each other and end up in a squabble.

They’ll only end up taking it out on you.