Remember When Mark Zuckerberg Filmed Himself ‘Smoking Meats’ To Convince The World He’s Definitely A Normal Human Being? 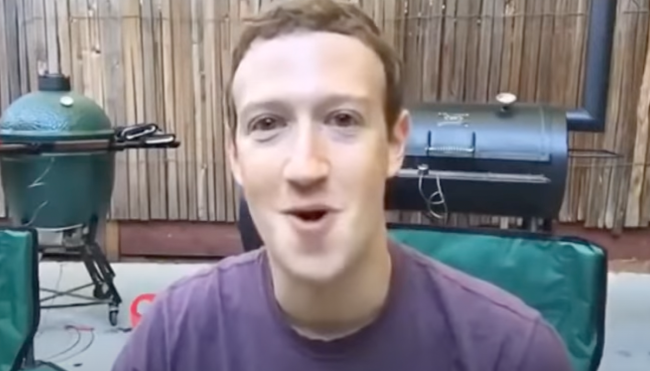 Facebook founder Mark Zuckerberg has spent over 15 years attempting to convince the world he’s totally a real human being and definitely not a highly-sophisticated robot serving as the harbinger for humanity’s impending downfall courtesy of the artificial intelligence that led to his creation.

However, if his lifeless eyes—black eyes, like a doll’s eyes—don’t serve as proof that the latter is indeed the case, there are plenty of anecdotes involving Mark Zuckerberg that would suggest he’s one of the weirdest “people” you’ll ever encounter, ranging from the time he coded a program on his private jet to try to beat a high schooler at Scrabble to the rumor he once had a Facebook employee blowdry his armpits before a speech as a result of the glitch that causes his artificial sweat glands to malfunction in stressful situations.

There was also the time he casually used a laser gun to slaughter a goat in front of Jack Dorsey after inviting the Twitter founder to his house for dinner, as Zuckerberg claims meals “taste doubly better when you hunt the animal yourself,” a tenet he revealed in a Facebook Live video in 2016 where he uttered the words “smoking meats” way too many times in an attempt to yet again prove he is just a super normal guy who does super normal things like the rest of his fellow earthly beings.

According to Insider, The Zuck hopped on Clubhouse for a chat with venture capitalist Josh Constine on Thursday when the topic of the many memes he’s found himself at the center of came up. After Constine asked if he had a preference, Zuckerberg ran the question through his humor algorithm, which eventually spit out the following answer:

“Probably, if I had to go with a favorite, I think it’s gotta be ‘Smoking Meats.’ I do love grilling and cooking, and that was silly, and I appreciate that everyone enjoys it.”

As a result, I now have the perfect excuse to revisit what is one of my favorite videos on the internet for reasons I can’t really articulate, as nothing sums up the inherent bizarreness of the Facebook CEO quite like the 32-minute stream where he uttered various iterations of the phrase “Smoking Meats” dozens of times while professing his love for Sweet Baby Ray’s (which is certainly a solid BBQ sauce but also a hilarious choice for someone who was worth over $50 billion when he hosted the stream.)

If you’ve never had the privilege of watching Mark Zuckerberg smoke some meats but don’t have 32 minutes to spare, someone on YouTube was nice enough to compress the highlights into a 2:20 video that you can easily digest (just like Mark Zuckerberg did when the ribs and brisket entered the functional stomach he certainly possesses.)

I’m also not sure when a GIF of Mark Zuckerberg saying “Smoking Meat” may come in handy, but I figured I’d whip one up if you ever encounter a scenario where it seems appropriate to deploy it.