Former Packer Martellus Bennett Rips Aaron Rodgers For Phony Response To Protests: ‘It’s Just Not True. I Was There’ 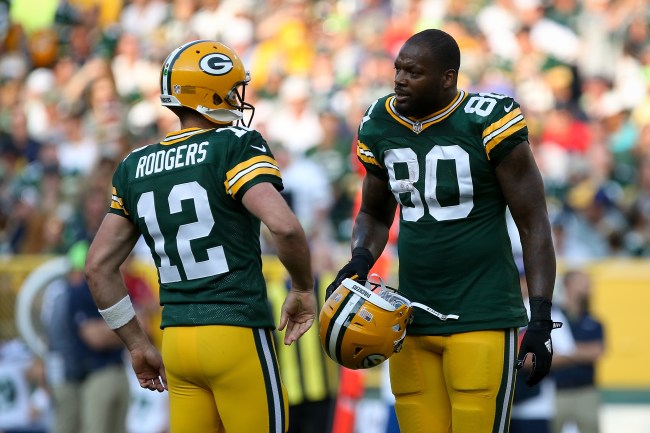 While the city of New Orleans collectively burns Drew Brees’ jersey after his unpopular protest take, Aaron Rodgers has largely been praised for his “listen with an open heart” stance on the Black Lives Matter movement.

The Packers QB posted a 2017 photo locking arms with teammates on the sideline, accompanied with the following message:

“A few years ago we were criticized for locking arms in solidarity before the game. It has NEVER been about an anthem or a flag. Not then. Not now. Listen with an open heart, let’s educate ourselves, and then turn word and thought into action.”

Aaron Rodgers “THEY have a battle for racial equality. That’s what THEY’RE trying to get a conversation started around.” Doesn’t sound like an ally sounds like a spectator. pic.twitter.com/kZQNyEkWMY

I don’t want to see y’all paint these dudes as white saviors that were always speaking up. It’s just not true. I was there.

Rodgers wasn’t the only one in Bennett’s crosshairs. The NFL journeyman went scorched earth on Drew Brees and white NFL quarterbacks across the league:

“Tell me one white QB that truly stands for something other than their captain America images….”

The former tight end also bluntly stated that, “the NFL is racist,” and cited the lack of black coaches in the NFL as evidence.  As of 2020, the NFL has three African-American head coaches, the same number as in 2003 when the Rooney Rule was adopted.

Rodgers has yet to respond to Bennett’s comments, and likely never will.