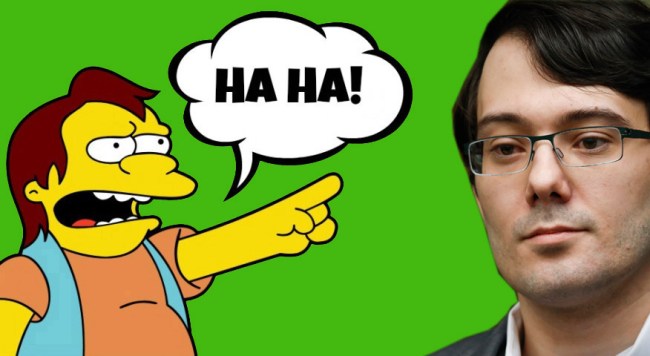 Remember when walking penis Martin Shkreli pulled one of his patented troll moves and bought the lone copy of a new Wu-Tang album for $2 million? Then remember a week or so ago when he said he was going to sell the album on eBay? Yeah, well he should have sold it a little sooner because karma just hit him again as it appears that Wu-Tang album he paid $2 million for is fake.

At least according to some news that Bloomberg just released after doing a little investigating and interviewing those musicians who actually appear on Once Upon a Time in Shaolin.

The rapper Killa Sin didn’t think he was contributing verses to a Wu-Tang Clan record a few years ago when he stood before a microphone in a hotel room in Staten Island, N.Y. A Moroccan producer known as Cilvaringz had flown in for the sessions because Killa Sin, whose real name is Jeryl Grant, was barred from travel by the terms of his parole.

Like any good clan, Wu-Tang is a network that extends from core members to bit players; it can be hard for outsiders to say with complete confidence who’s in or out at any time. Killa Sin is a gifted lyricist with a different crew, Killarmy, which is part of the Wu-Tang’s extended “family,” but as he understood it, the work he was doing with Cilvaringz wasn’t an official Wu-Tang project.

“The way he presented it,” Killa Sin says of his recording with Cilvaringz, “was it was going to be basically his album, and he wanted me to do some work for him.”

Killa Sin is not the only member of the group that believe that the album was not a Wu-Tang project.

“It’s not an authorized Wu-Tang Clan album,” says Domingo Neris, the manager of the rapper U-God, a charter member of the Clan. “It never was.”

“When we did the verses, it was for a Cilvaringz album,” says James Ellis, manager of Method Man, another core member of the group. “How it became a Wu-Tang album from there? We have no knowledge of that.”

So not only is Shkreli being sent to “the worst prison”, on top of that the album he is trying to sell on eBay, which currently has a bid of over $1 million might not be worth even a fraction of that.

How ironic would it be if Shkreli paid a far higher price for something that in reality isn’t nearly worth what was being charged for it, huh?